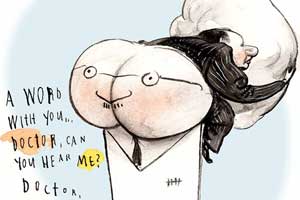 I’m really an insurance company…but I play a doctor on TV.

All week, as the intensity of the health care debate has been ratcheted up, Obama and reformers have had to defend against attacks on reform. These have gotten sharper and more destructive as poll numbers for reform sink, commensurate with many millions spent on coordinated ad and media reframing of the issue, a stunning replay of the Clinton Health Care Debacle. The new frame is: The system will be damaged by what the government does and patients will pay more and get less.

I would like to un-reframe for a moment. The reality is there is no “system.” And that’s what the insurance industry likes: a chaotic scramble where business always wins…because this is not a “health care” model. It is a business model. So the Big Insurance companies are companies. They make their decisions based on profit for their stockholders and investors. Not patients. The reform, the one Obama so clumsily tried to explain on Wednesday (why didn’t he call an illustrator?) is to give a Medicare option to everyone. If Medicare sucks for those under 65, then it must suck for those over 65. So why not come right out and say it?

So Blue Dogs and Red Republicans, glowing in gold dust flowing from K Street, are talking about keeping this a business. Big business.

These corporations are throwing people off the system every day and undercutting the rest of us for health care. This is rationing. And we all know it. The ads, media, and pols want to keep this in the realm of “normal.” And it doesn’t belong there. It is a public need; a utility. A public utility. That’s my frame.

Neocon-man William Kristol declared his recommended Republican solution to health reform this week: “Kill it!” And so the chorus joined in.