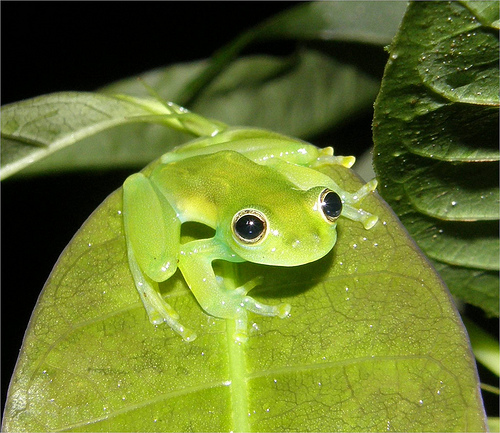 Thanks to pesticides, invading bullfrogs, nonnative diseases, and the loss of wetlands, the northern leopard frog may warrant protection under the Endangered Species Act in 18 western states, according to a U.S. Fish and Wildlife Service announcement that’s scheduled for today.

National Geographic reports that the “mating between the rare California tiger salamander and the introduced barred tiger salamander has created a monster.” The combination of native and nonnative species seems to be the worst pairing since ligers. As a result of these new creatures, biodiversity is taking a major hit in the ponds of California‘s Salinas River Valley. The new superpredator grows larger than either of its parent species, so “its bigger mouth enables it to suck up a wide variety of amphibian prey.” This spells certain trouble for frogs who have difficulty competing against larger salamanders.

Check out this National Geographic video that shows a bunch of new species that were recently observed in an isolated Ecuadorian forest, including the transparent glass frog and the E.T.-like “ugly salamander”: