Pet program: Will battle to the death for the partly Okie-built Future Combat Systems—the Army’s gee-whiz plan to interlink all manner of weapons, vehicles, and robots—which Gates slated for cancellation.

* Has accused Obama of trying to “disarm America” in order to increase “welfares.”

Pet program: The F-22 is assembled in Georgia. This Cold War-era plane was put into production before being fully tested; technical problems have caused costs to skyrocket to $351 million, more than double original projections. This infamous golden turkey has never flown even a single combat mission.

* Chambliss may have finagled five deferments from the Vietnam War, but when it comes to legislative combat, he’s in his element. The Georgia delegation is the most aggressive defender of the F-22, which Chambliss has brought back from the brink of cancellation before.

* Lieberman will be a canny opponent of even minor cuts to missile defense—even if it means risking his fragile détente with the president. 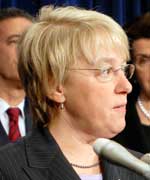 * Murray, the leading recipient of defense and aerospace donations this election cycle, is resisting change to the Pentagon’s broken procurement process. She’s already tried to pass legislation banning cuts that cause job losses—basically a poison pill for reform.

* For three years the Pentagon has said it doesn’t need any more C-17s, which cost around $266 million each. And for three years Boxer and the California delegation have insisted the government buy more. (She squares this with her anti-war résumé by arguing that they help humanitarian missions.) This year she helped secure eight more planes. 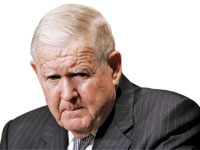 The Last Line of Defense

Pet programs: All of them. Inouye, known as “king of pork” and chair of the Senate Appropriations Committee, and Murtha, the House’s top recipient of defense dollars, target of corruption probes, and earmarker extraordinaire, get Congress’ last word on DOD funding.

* Murtha, who often allots money for projects that the Pentagon has not requested, launched an annual contractors’ fair dubbed “MurthaFest.”