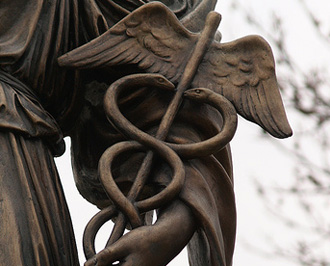 Doctors, nurses, psychologists, and other health care professionals complicit in the US torture program should be subject to an independent investigation, and those found to have violated professional ethics or the law should be prosecuted and/or lose their license and professional society memberships. That sentiment, from the nonprofit Physicians for Human Rights (PHR), may well mark the first time a doctors’ group has demanded true accountability of its professional peers.

Back in 1986, PHR was founded on the idea that health care professionals—given “their specialized skills, ethical commitments, and credible voices, are uniquely positioned to investigate the health consequences of human rights violations and work to stop them.” Little did the founders realize they would one day be looking into the activities of their own government and colleagues.

Since 2002, doctors, medics, and mental health professionals in federal employ have brazenly violated longstanding and internationally recognized ethical obligations forbidding participation in torture and abuse of prisoners. As Justine Sharrock reported in our July/August issue (“First, Do Harm“), some military doctors did speak up internally regarding the aberrant policies—which came down directly from Donald Rumsfeld’s Pentagon by way of the CIA and lawyers in the White House Office of Legal Counsel. But those voices were quickly stifled. Retired Army Brig. General Stephen N. Xenakis told Sharrock that after the dissenters were shut down, they and others feared for their careers and simply shut up.

They weren’t the only ones. Physicians for Human Rights, which shared a Nobel Peace Prize in 1997, has been conducting the sorts of analyses that others—including state medical licensing boards and professional groups such as the American Medical Association and the American Psychological Association—have simply refused to undertake.

Forced Shaving of Head and Beard—Chiefly designed to inflict psychological harm by means of humiliation, both personal and religious.

Dietary Manipulation—Mr. Bin-al-Shib reported that he went three to four weeks without solid food, and was only provided with Ensure and water.…While physical risks of a liquid diet are minimal as long as appropriate calories and nutrients are provided, the intent of dietary manipulation is to inflict psychological distress by infringing on the detainee’s sense of autonomy and self control and increasing discomfort and a sense of helplessness and dependency.

Prolonged Diapering—Access to toilet is a universally recognized minimum standard for prisoners and detainees.…The chief aim of this technique is to cause psychological stress through humiliation, induced dependency, loss of autonomy, and regression to an infantile state. [At Guantanamo, interrogators took] the detainee to pre-toilet-training levels. When combined with a liquid diet, the experiences of regression, humiliation, and dependency are magnified.

Walling—Six of the fourteen high-value detainees interviewed by the [Red Cross] reported being placed in a neck collar or roll and then slammed against a wall.…Walling results in blunt trauma and acceleration/deceleration type injuries. Blunt trauma can result in bruises and bleeding from ruptured blood vessels. Studies have observed persistence of musculoskeletal pain cause by blunt trauma even a decade after the trauma has occurred.…Psychological stress, which is the primary aim of the procedure, is achieved by use of surprise, generating a startle response, an experience of shock, loss of control and helplessness.

Confinement in a Box—An extreme example of stress positions, with the added effect of decreased access to fresh air, temperature changes, light deprivation, and isolation. Stress positions have been associated with permanent joint and ligamentous injury, and both acute and prolonged musculoskeletal pain….Like their canine counterparts, humans subjected to similar confinement develop psychomotor and cognitive responses that would be clinically diagnosed as depression and, in certain cases, PTSD. Such symptoms include apathy, helplessness, hopelessness, foreshortened sense of future, and a (in this case justified) lack of belief in their ability to affect their future prospects. In Seligman’s experiments, these symptoms were severe and lasting.

At a certain point, as we’ve reported, the CIA and Pentagon started requiring a doctor and a psychologist to be present during enhanced interrogations—psychologists helped design the torture sessions and doctors signed off on them. The PHR authors counter the common rationale that having doctors or psychologists around is in the prisoner’s best interest: The medical presence “did not make these methods safer, and in fact only served to sanitize their use and enable the abuse to escalate, thereby placing health professionals in the untenable position of calibrating harm rather than serving as protectors and healers as required by their ethical oath.” (This sentiment mirrors what several medical ethicists told Sharrock.)

Doctors, noted the report, also helped White House lawyers come up with their legal justifications for torture, including waterboarding:

“It is precisely to avoid such complicity,” the report continues, “that health professionals have recourse to professional codes of ethics, as well as international standards of medical conduct. Familiarity with these codes—not to mention basic human decency—should preclude such conduct.”