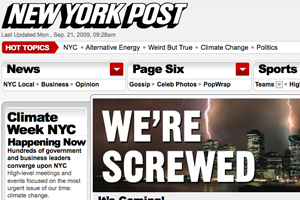 The Yes Men are back. Early this morning, the pair of pranksters and their henchpeople hit the streets of Manhattan to hand out copies of a climate change-themed New York Post spoof with the blaring headline: “WE’RE SCREWED.” The cover story explains, “It’s official. It’s getting hot down here. And if we don’t stop burning oil and coal, the Big Apple will be cooked.” Imagining what would happen if a tabloid took the fate of the planet as seriously as terrorist plots and celebrity murder trials is clever, and will no doubt get some New Yorkers thinking about how climate change affects them, but is it funny? Not really, but that’s the point. (Actually, there’s some dark humor buried on the comics page and the ads for low-impact products such as Sex and Tap Water are amusing.) The eco-freakout Post is packed with facts and real quotes—unlike the Yes Men’s previous fantasy newspaper, a New York Times special edition that announced the end of the Iraq War. “This could be, and should be, a real New York Post,” says Yes Man Andy Bichlbaum. No joke.