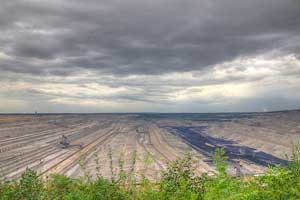 When President Obama nominated Joseph Pizarchik to head the Office of Surface Mining Reclamation and Enforcement, critics blasted the choice, charging that Pizarchik has a history of favoring coal industry interests over the well-being of local residents. Still, it appeared Pizarchik would sail to confirmation this week—until an unknown senator placed a hold on his appointment. Here’s why the mystery senator might be worried that Pizarchik is the wrong man for the job.

Pizarchik has served as the director of Pennsylvania’s Bureau of Mining and Reclamation since 2002. The office, a division of the Pennsylvania Department of Environmental Protection, oversees mining permits and the enforcement of environmental rules related to mining and waste disposal. And residents of Pennsylvania mining areas are so unhappy with his performance that they’re organizing to oppose the nomination. Under Pizarchik’s watch, the bureau developed new policies for the “beneficial use” of coal ash, including allowing it to be dumped in old surface mining sites—meaning, essentially, that power plant waste could be left in unlined pits around the state.

The hazards of coal ash contamination attracted national scrutiny last December when an earthen dike owned by the Tennessee Valley Authority’s Kingston Fossil Plant broke, spewing 1.1 billion gallons of dark grey coal slurry into Tennessee homes and waterways. A 2007 study by the Clean Air Task Force found that 10 out of 15 Pennsylvania mine sites where coal ash had been dumped tested positive for arsenic, lead, cadmium, selenium, and other hazardous materials. The study criticized the role that Pizarchik’s office played in allowing this practice to continue.

Pennsylvania residents have also expressed concerns about longwall mining, which has expanded in the state in recent years. This coal extraction method involves burrowing underground, and has wreaked havoc on both the water systems and property in the state. Residents say Pizarchik did not enforce existing regulations as the head of the office, and that since 2006, the department has made it considerably more difficult for residents to comment on mining permit applications. Public meetings are less frequent and often held during work hours, they say.

The Mountain Watershed Association, Friends of the Earth, Ohio Valley Environmental Coalition, Public Employees for Environmental Responsibility, the Alliance for Appalachia, Environmental Integrity Project and Appalachian Voices are all stoking opposition to the nomination. In addition, the Citizens Coal Council recently filed suit against the Office of Surface Mining, accusing it of allowing the Pennsylvania office that Pizarchik headed to commit “chronic and deliberate violations” of surface mining regulations. “He’s unacceptable,” said Aimee Erickson, coordinator of the Citizens Coal Council.

If appointed head of OSM, Pizarchick would not only oversee coal ash disposal, but also the regulation of other mining practices such as mountaintop removal, the controversial method in which mountains are blown up to extract coal and the remaining waste is dumped in valley fills. In his confirmation hearing on August 6 before the Energy and Natural Resources committee, Pizarchik was asked to explain his views on this practice, which is not common in Pennsylvania but is a contentious issue in other Appalachian mining states. Pizarchik’s responses were extremely vague, sometimes even incoherent. When questioned about his views on the Obama administration’s new policies for mountaintop mining, which would require tougher scrutiny of environmental impacts and which the Office of Surface Mining would be directly involved in implementing, Pizarchik said he would have to “learn more about the facts.” He added:

And getting involved and getting a better handle on the details of that as how that is actually being implemented I think in getting an understanding of the facts would be the first basis to determine what has transpired in the past. Has that activity been done in accordance with the law as enacted by Congress and the regulations adopted by the state and federal agencies? And then looking at those facts and deciding what would be the appropriate action to take at that time.

“We would think that the head of the Office of Surface Mining Reclamation and Enforcement would be someone who wouldn’t have to be educated about mountaintop removal coal mining,” says Bill Price, an organizer with the Sierra Club environmental justice program. “We need to have someone who…understands the significant impacts of it.”

Although several senators on the Energy and Natural Resources Committee expressed concerns about Pizarchik, only two senators voted against him at an October 8 meeting: Sen. Bernie Sanders (I-Vt.) and Sen. Robert Menendez (D-N.J.). “Transitioning to a new, clean-energy economy requires people who are willing to break free from the inertia of doing things the way they have always been done,” said Menendez in a statement. “I do not believe Mr. Pizarchik is willing to look at these issues with a fresh eye.”

Sen. Ron Wyden (D-Ore.), another member of the committee, also cited concerns about the nomination in a written statement, though he supported the nomination with the caveat that the committee should take a more active role in overseeing the office. And committee chair Jeff Bingaman acknowledged in the meeting that Pizarchik’s nomination “has proved controversial,” adding that his office had received several hundred e-mails and letters from coal-field residents opposing the nomination. However, he planned to give Pizarchik the “benefit of the doubt”:

I’m not dismissing or minimizing the serious concerns that were raised. I share many of those concerns. But I don’t agree that all of these problems can be laid at Mr. Pizarchik’s door… I do not think it fair to vilify him for the shortcomings in laws that have been passed by Pennsylvania’s General Assembly or the laws we passed here in Washington.

Bingaman makes a fair point that many existing laws, both federal and state, have enabled harmful mining practices. Yet Pizarchik seems to have allowed environmentally problematic practices to continue, and in some cases, become more prevalent. And his testimony before the Senate did little to allay concerns about his record or his awareness of the issues his office will deal with.

It’s unclear which senator moved to block the floor vote on Pizarchik ‘s appointment, although a spokesperson for the Energy and Natural Resources Committee confirmed the hold was based on concerns about the nominee, not an unrelated matter (as is often the case with holds). Sanders’ office has denied preventing the vote. A spokesperson for Menendez said on Monday that the office does not generally comment on anonymous holds.

So far, the Obama administration is standing behind its pick. A spokesperson for Interior Secretary Ken Salazar issued a statement last week stating that Pizarchik is the “right man at the right time” for the job who will “help move the department forward with coal production in an environmentally responsible way.”