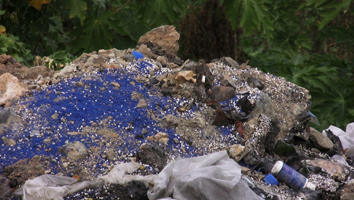 In the wake of Mother Jones‘s recent Fiji Water expose that tackled the company’s indifference to the country’s military junta and the surrounding communities’ dire lack of clean drinking water, we received many letters. One in particular caught our attention. In 2007 Mary Ackley, then a graduate student at the University of Vermont, was doing research on the Vatukoula gold mine in Fiji when she saw yet another piece of the story.

On one of Ackley’s trips to visit the Vatukoula mine, located about 18 miles from Fiji Water’s bottling plant, she saw makeshift fences made of oversized spools of Fiji Water labels. Then she saw huge plumes of smoke rising from the local dump. When Ackley looked closer she noticed piles of discarded Fiji Water bottles, reels of company labels, and plastic pellets used to make the bottles. It looked like too much trash to be generated by the small town, so Ackley started asking around. Sure enough, residents who lived next to the dump said they had seen Fiji Water trucks pass by three or four times a week since about 1996, when the company first started operations.

But that was back in 2007. Last year, Fiji Water representative Rob Six told Ackley in a written letter that the company had been phasing out the use of the dump since June 2007. Apparently, as of last fall, the company stopped burning trash there all together. Nevertheless, asthma rates in Vatukoula are through the roof—which the community told Ackley is likely a result of gold mining operations, as well as carcinogens released by constantly smoldering Fiji Water trash over the past decade. Ackley’s surveys showed that the number one concern in the community was respiratory problems caused by airborne carcinogens. It remains to be seen how Fiji Green will address the damage done.

This year Ackley and filmmaker Kristian Maynard released a short documentary in which they narrate their discovery of the Vatukoula dump and explore the gold mining’s horrific effects on Fijian health. Last weekend, it won an award at the Yosemite International Film Festival. Check out the clip below.

Update: Laura Kiesel has a story in Z Magazine this month about Fiji Water’s incineration of its plastic waste at the Vatukoula dump. When Kiesel asked company spokesperson Rob Six about the practices, he told her that as of last year, Fiji Water now recycles everything. Yet he didn’t respond to her questions about the damage already done to the community’s air and water quality. In a lame attempt to distance Fiji Water from the gnarly practices, Six stressed that they weren’t the ones who did the burning, even if they knew about it. Fiji Water had contracted Tavua Plant Hire company to dispose of the waste, and it was Tuvua that paid the mining company that owns the dump in order to do the burning. Click here for the PDF.