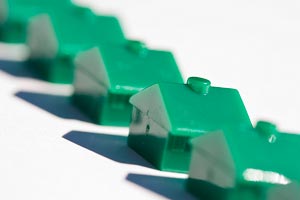 Photo used under a Creative Commons license by <a href="http://www.flickr.com/photos/wwworks/" target="new">woodleywonderworks</a>.

Is the Obama administration’s signature foreclosure relief program succeeding? Absolutely, according to Treasury Secretary Timothy Geithner, who last Thursday trumpeted the news that 500,000 mortgages had been modified—on a trial basis—under the Home Affordable Modification Program, a month ahead of the administration’s November 1 benchmark for reaching this goal. A day later, however, the Congressional Oversight Panel (COP) reached a far different conclusion when it released its own evaluation of the Treasury Department’s foreclosure prevention efforts. According to the financial watchdog, the efficacy of HAMP is very much in doubt, and the program may wind up doing little to assuage the growing foreclosure mess.

While Geithner described reaching the 500,000 milestone as “an important shift,” a closer look at what this figure actually means suggests the administration remains a long way off from providing the widespread mortgage relief President Obama pledged in February, when HAMP was first unveiled.

Under HAMP, borrowers apply for modifications through their mortgage servicers, which receive incentive payments from the government for changing the terms of eligible mortgages to lower monthly bills. If accepted into the program, homeowners enter a three-month trial period. To expedite the process, servicers are allowed to begin the trial period without official income information. After the homeowner successfully completes the trial period, though, the servicer must use official documentation, which could lead to recalculating the monthly mortgage bill and a fluctuation in price. If all goes well, the result is a 5-year loan modification that is supposed to help beleaguered borrowers keep their homes.

But 500,000 three-month test runs don’t translate into 500,000 rescued homeowners—far from it. Here are a few scenarios that illustrate why: John Doe could miss a payment during the trial period and get kicked out of HAMP. Sally Smith, on the other hand, could complete the trial period, only to receive higher payments she can’t afford when her permanent modification is recalculated, forcing her into default. Finally, Jane Jones could last two or three years in HAMP, but suffer some form of financial hardship—a medical emergency, bankruptcy—and wind up in jeopardy of foreclosure once again. Each of these borrowers would be included in the half-million figure Geithner cited, but ultimately HAMP would have failed them.

Joseph Smith II, the president and CEO of Default Mitigation Management, a private loan negotiation and technology company, estimates that about half of the trial modifications won’t become permanent ones. And a significant percentage of permanent modifications will also fail, he adds. The Treasury’s half-million figure, Smith says, “is political spin.”

According to the COP, HAMP’s initial results have been underwhelming. As of Sept. 1, the panel reported, the program had resulted in just over 1,700 modifications—a sliver of the millions of mortgages on the brink of foreclosure. And as the watchdog’s report points out, those permanent modifications hardly guarantee long-term success.

What’s more, the COP report says that HAMP is ill-suited to help the kinds of homeowners facing foreclosure in the near future. Housing experts and government officials predict a new wave of defaults on so-called payment option adjustable rate mortgages—which allow borrowers to initially make low, often interest-only, loan payments before payments adjust, resulting in monthly bills that can double or triple—and other risky loans that are set to jump in price in the coming months. But as the COP points out, HAMP’s guidelines could exclude many homeowners with these types of mortgages, leading the watchdog to conclude that “HAMP is targeted at the housing crisis as it existed six months ago, rather than as it exists right now.”

Already the Treasury has revised its outlook on how many modifications the program will provide. Where initially HAMP was expected to aid between 3 and 4 million homeowners, now the agency says it will modify at most 2.6 million mortgages at an estimated cost of $43 billion. Even if it succeeds in reaching this target, this effort will help only a fraction of the 13 million homeowners expected to wind up in foreclosure in coming years.

HAMP’s shortcomings have led to rumblings in Washington about reviving the process of modifying mortgages in bankruptcy courts, known as “cramdown.” The Senate killed such an effort earlier this year and the mortgage industry is bitterly opposed. Both Sen. Dick Durbin (D-Ill.), the Majority Whip, and Rep. Barney Frank (D-Mass.), chairman of the House Financial Services Committee, have expressed concern with HAMP and support for cramdown. Without specifically mentioning court-negotiated modifications, the COP’s report exhorts the Treasury to “consider whether new programs or program enhancements could be adopted” to recalibrate its foreclosure prevention strategy. Either way, it’ll take more than rosy statistics to rescue the millions of homeowners barely holding on.