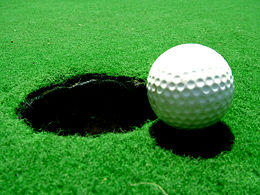 Whimsical: A group of Scottish scientists recently went looking for the Loch Ness monster. Not-so-whimsical: They found no trace of Nessie. Instead they found evidence of…old people. In the form of golf balls. Thousands of them. The balls came from a nearby driving range popular among tourists.

So clearly this is fodder for another, even sadder, verse of “Puff, the Magic Dragon” about Jackie Paper’s insipid golden years. But if the coming-of-age overtones alone aren’t depressing enough for you, consider this: According to CNN, the 300 million golf balls that are lost or discarded every year in the US will take up to 1,000 years to decompose. During that time, they can contaminate surrounding ecosystems with heavy metals:

It was found that during decomposition, the golf balls dissolved to release a high quantity of heavy metals. Dangerous levels of zinc were found in the synthetic rubber filling used in solid core golf balls. When submerged in water, the zinc attached itself to the ground sediment and poisoned the surrounding flora and fauna.

And friendly water monsters, too, no doubt. Maudlin!