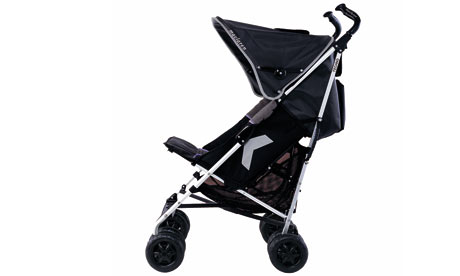 We’re officially in Day 4 of the Maclaren stroller recall, and it’s abundantly clear that far too few parents have gotten the message. In case you haven’t heard (or are not a multitasking metro-mommy or -daddy) fancy pants British baby-stuff maker Maclaren has recalled every single stroller it has sold since 1999 for this compelling reason: Their hinges amputate little baby fingers. Twelve little baby fingers in America so far, to be exact. In fact, the New York Post (guardian of truth that it is) reported today that Maclaren knew of the defect for five years—five—before issuing a recall. Parents have been surprisingly nonchalant, while nonparents (like me, for instance) seem to have been gripped by news that the decade’s must-have child accessory is actually evil. Brooklyn alone is swimming in schadenfreude.

But back to the parents for a second: What’s wrong with you people? The New York Times‘ City Room blog reported on Wednesday that pram-pushers in Park Slope, the Big Apple’s de facto Maclaren capital, were utterly uninterested in the recall and the easy-to-install safety kits that render their pricey strollers harmless. We know the risks, they blithely told the Times. I’ll take my chances. But that’s New York for you, right?

Wrong! This morning in sunny (and fiercely overprotective and neurotic) San Francisco, during my pre-coffee commute, I was confronted by the same devil-may-care-about-junior’s-appendages attitude. Specifically, a newbie dad struggling to juggle his his precious 15-month-old, North Face backpack, and $200 Maclaren stroller as he boarded the train. Long story short, I ended up with the stroller between my knees while the happy ten-fingered baby babbled on about the scenery and waved incessantly at every stranger, and I bit through my tongue so as not to blurt out the *ahem* risks associated with that naked hinge. Finally, it was too much to bear.

“You heard there’s a recall on this stroller, right?”

The man laughed. He had.

“How did you hear about it?”

Was he planning to get the safety cover?

He was kidding. But still.