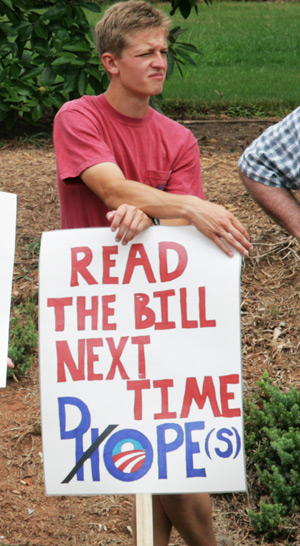 Should members of Congress read the bills they vote on?

It seems like the answer is an obvious “yes.” That intuitive response is what the Sunlight Foundation is counting on. Sunlight, a Washington-based transparency and good government group, has been leading the charge for the “read the bill” movement. But a closer look at the “Read the Bill” website reveals what’s really going on.

Sunlight isn’t actually lobbying for a law requiring that members of Congress read legislation before voting on it. How would you enforce such a law? Quizzes? Swearing under oath? Instead, Sunlight is pushing for the institution of a “72-hour rule” requiring that non-emergency legislation be posted online for three days before debate begins. That is a good idea (pretty much every other good government group has endorsed it), but it won’t necessarily do anything to ensure that members of Congress read the bill, let alone understand it. In fact, if you take a look at the video promoting their campaign on this page, it’s clear that Sunlight is using the oldest trick in the process reformers’ book: using current political issues, in this case right-wing rage about health care and the stimulus, to get people interested in process reforms—in this case, the 72-hour rule.

Most process issues in Congress are only important to one party at a time, depending on whether that party is in or out of power. (Sunlight’s Paul Blumenthal has written a history of the 72-hour rule that highlights this very problem.) Reading the bill, involving the minority in legislation, not writing laws “behind closed doors,” protecting the filibuster, oversight—these things suddenly become much more important when your party is out of power. (Update: term limits, too!) Likewise, governing parties love to complain about the filibuster supermajority requirement, delaying tactics, the slow pace of judicial confirmations, and so on. It’s very easy to find members of Congress contradicting themselves on these questions depending on whether they’re in the majority or the minority.

Of course, the flagrant hypocrisy of most lawmakers doesn’t mean they’re are always wrong. Posting bills online will give outside groups like Sunlight more time to analyze legislative language and figure out what exactly the bills do. That’s probably a net good. But the real issue is not whether your representatives simply read the bills they vote on. It’s whether they understand them. For that, you need far more sweeping reform.

Sunlight has slammed Rep. John Conyers (D-Mich.) for asking: “What good is reading the bill if it’s a thousand pages and you don’t have two days and two lawyers to find out what it means after you read the bill?” But Conyers is right. Bruce Bartlett explains:

While a seemingly reasonable demand, it is, in fact, a waste of time.

The reason becomes obvious the moment one actually reads legislative language. Here is a section I pulled at random from the health bill:

(a) AMENDMENTS TO THE EMPLOYEE RETIREMENT INCOME SECURITY ACT OF 1974.–

”(h) TERMINATION.-This section shall cease to apply to any group health plan as of the date that such plan becomes subject to the requirements of section 211 of the (relating to prohibiting preexisting condition exclusions).”.

What is immediately obvious is that none of this language makes the slightest bit of sense without reference to the underlying law that is being amended. To begin to comprehend what this language seeks to accomplish one would need to have a copy of ERISA as well. Then one would have to see what exactly these additional words do to change whatever section of law is being amended.

But this is just the beginning because many terms like “preexisting condition” have a precise legal definition that may be spelled out in some other law or changed in some other part of the legislation. Moreover, that definition may have been clarified in some way by government regulations or court cases that are not even referenced but may be critical to understanding precisely what the new legislation actually accomplishes.

Better “read the bill” reform would start, I think, with extending to all of Congress the Senate Finance Committee’s tradition of debating and voting on bills written in “conceptual language”—otherwise known as plain English. If that was the standard for what was being voted on and discussed and posted on the web in advance, ordinary people and members of Congress (and journalists, for that matter) would be much more likely to actually understand what was going on.

The obstacle that prevents this from happening, as Bartlett hints at in his excellent post, is that a lot of people in Washington have jobs deciphering legislation for members of Congress. Those people, more often than not, are lobbyists—some of whom seem to have more influence on the language in bills than elected representatives do. Plus, many members of Congress have an interest in the public not always understanding exactly what they’re doing. The veil of legalese helps them do unpopular things that they think are necessary without having to worry about trying to convince anyone. It also helps them give handouts to favored industries without having it look too blatant. And it helps politicians (and their surrogates) get away with telling outrageous lies about the contents of the bill (see: death panels.) Plain English legislation posted on the Internet would cut out many of the middlemen and would make members of Congress more vulnerable to popular pressure. You’d still get people like Sen. James Inhofe who would make up their minds without reading the bill, but that kind of behavior would be less excusable. Wouldn’t that be nice?