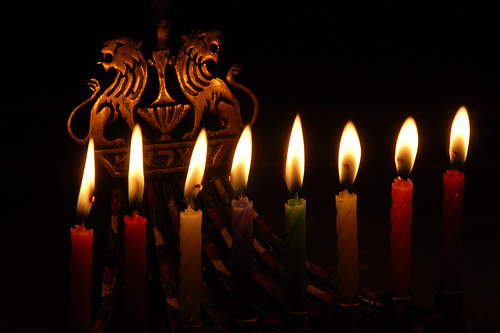 A bit of balagan, as my family would say, has broken out over Utah Sen. Orrin G. Hatch‘s first foray into Jewish music, such as it is. Though his song, “Eight Nights of Hanukkah”, bears no resemblance to any traditional Jewish music, it does treat an obviously Jewish theme—the story of Hanukkah—and was meant, in all earnestness, as a gift to the Jews. The New York Times called it “nonreturnable,”  probably an apt description for the way many American Jews feel about evangelicals and their love of all things Old Testament. Which is, truth be told, a little bit feh. After all, many American Jews are a) secular and b) liberal, whereas American Evangelicals are essentially the opposite.

Still, there is a treasured American tradition of Mormon- and Evangelical-on-Hebraic love, and Orrin Hatch loves Jews. Like, keeps a Torah in his office kind of love. Like, has more mezuzot (to be fair, also more doorways) than my house kind of love.

As with most Jewish holidays, the Christians read their own special meaning into the teachings of Hanukkah, a minor holiday celebrating the rebellion of a group of religious zealots in Jerusalem that occurred about two hundred years before the first Christmas. The senator—an avid hymn writer—does not himself carry the song, relying instead on the very talented Rasheeda Azar of Indiana. Talented, sure, but Ofra Haza you are not, sweetheart.

“So all it is is a hip-hop Hanukkah song written by the senior Senator from Utah. That’s all it is.” Priceless.

Eight Days of Hanukkah from Tablet Magazine on Vimeo.