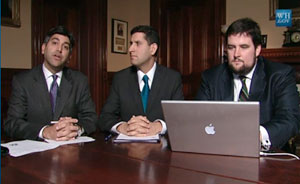 Soon, the public will be able to see how seriously the government is taking President Barack Obama’s call for more transparency at executive branch agencies like the Pentagon, the State Department, and the Department of Health and Human Services. A new Open Government directive (PDF) issued by the Office of Management and Budget on Tuesday sets a series of definitive deadlines for agencies’ transparency moves. But will the deadlines be met?

The new directive, the announcement of which was streamed live on whitehouse.gov, calls for each agency to “identify and publish online in an open format at least three high-value data sets” within 45 days and create an open government webpage within 60 days. Perhaps the biggest deadline is in 120 days, when agencies must have an open government plan completed and available to the public. If that doesn’t happen, it could raise questions about whether the administration’s goals for open government are realistic or achievable.

“In some ways that is the test of how serious the Obama Administration is about transparency,” Meredith Fuchs, the General Counsel of the National Security Archive, said in a press release Tuesday morning. “If the White House, OMB, and the heads of the agencies are serious, then they will use their authority to make these changes real.”

Steven Aftergood, a government secrecy expert at the Federation of American Scientists, writes on his blog Secrecy News that the initiative shows “every sign of good faith.” But “success is not guaranteed,” Aftergood warns:

[T]he exercise of presidential authority is dependent on innumerable acts of compliance by scattered officials any of whom can, whether through disobedience or incompetence, frustrate the implementation of policy.  And the more ambitious the proposed change, the more likely it is to encounter resistance…. In any case, given the directive’s well-defined milestones and deadlines, it will soon be clear whether and to what extent the new openness initiative succeeds.

Whether the agencies will actually follow the administration’s instructions is the “most serious question” going forward, says Fuchs, the National Security Archive lawyer:

When President Bush issued a [Freedom of Information Act] executive order in 2007 some agencies took it seriously and other did not. The question is what will happen if some do not. Also, there is not clear funding provided for all of this, so the incentive may be… too ambitious. The public has to be engaged to make sure that deficiencies are brought to light. More importantly, the Administration’s leaders have to be willing to closely monitor implementation.

… The Administration has been talking about these issues for eleven months. We have been telling agencies to look at their FOIA logs and public affairs information requests and start figuring out what the public wants…. So, I do not think it should be too much of a stretch to meet the 45 days deadline for publishing a new high value data set. And, again, the public has to scream if what they come up with is not actually anything useful.

Open government advocates are largely happy for now. But if the administration lets them down, there will be a whole lot of screaming.