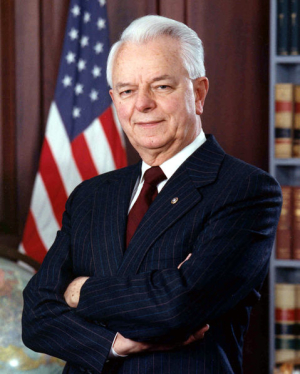 Throughout his long political career, 92-year-old Robert Byrd has been one of the coal industry’s staunchest defenders. But in a significant shift, he’s now arguing that the industry needs to face facts and “embrace the future.”

“[T]he time has come to have an open and honest dialogue about coal’s future in West Virginia,” Byrd wrote in an op-ed on Thursday. Byrd acknowledged that coal-industry jobs had been declining in the state, that mountaintop removal mining comes with environmental and health problems, and that some regulation of carbon dioxide emissions is inevitable.

Byrd took aim at the industry’s denial of climate change. “To be part of any solution, one must first acknowledge a problem. To deny the mounting science of climate change is to stick our heads in the sand and say ‘deal me out,'” he wrote. “West Virginia would be much smarter to stay at the table.” Coal-producing states “hold some powerful political cards,” he continued, and can play a part in shaping policy—but only if they are “honest brokers,” he wrote.

Byrd also hit back at the West Virginia Chamber of Commerce‘s attempt to get him to block health care legislation until the Obama administration eases regulations on the coal industry. “I believe that the notion of holding the health care of over 300 million Americans hostage in exchange for a handful of coal permits is beyond foolish; it is morally indefensible,” he wrote. “It is a non-starter, and puts the entire state of West Virginia and the coal industry in a terrible light.”

This is a major change of heart for Byrd, who just last year was the only Democrat to vote against even proceeding to debate a climate bill. In the past, he’s opposed most climate legislation, usually out of concern for coal interests. While he still sees a major role for coal, he’s recognizes that it’s  not going to be as abundant or as cheap as it has been in the past. “West Virginians can choose to anticipate change and adapt to it, or resist and be overrun by it,” he concluded. “The time has arrived for the people of the Mountain State to think long and hard about which course they want to choose.”