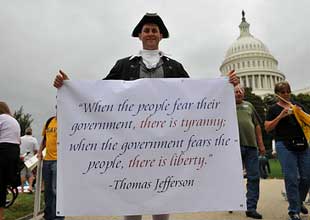 Photo used under a Creative Commons license by Flickr user <a href="http://www.flickr.com/photos/zenashots/" target="new">zenashots</a>.

Would a true Tea Party patriot drop nearly $1,600 in donor money for a small meal at a fancy steakhouse? Robin Stublen says no, and he’s mad as hell about the profligate expenditures of a GOP political organization that has glommed on to his grassroots movement. Stublen is the organizer of the Punta Gorda, Florida, Tea Party and a member of Tea Party Patriots, a national grassroots organization that has no offices, no president, raises virtually no money, operates largely on volunteer efforts, and, most important, doesn’t endorse candidates. But unbeknownst to many, there’s another outfit claiming ownership of this conservative movement. It’s called the Tea Party Express, and it has dominated Fox News coverage over the past year with its multistate bus tours and political rallies.

Behind it is a well-established Republican political action committee that has raked in tons of money fundraising under the “Tea Party” banner—and it has also spent a lot of that money in a fashion unbecoming a supposedly grassroots insurrection. For instance, according to recent filings with the Federal Election Commission, the PAC that created Tea Party Express dropped $1,597.29 over the summer for a meal for six at a tony Sacramento Chops restaurant, an expenditure that has Stublen seeing red.

“Six people averaged $266; that’s not grassroots. I kill bugs and cut grass for a living. I’m splurging when I spend $19 at Chili’s. Outback Steakhouse is reserved for Mother’s Day,” Stublen says.

For Stublen the pricey Chops tab is only the latest evidence that Tea Party Express is trying to capitalize on the movement for crass and self-serving political purposes—mainly as a fundraising machine for Republican causes. Starting in August, Tea Party Express organized two cross-country bus tours that bashed the Obama administration’s health reform and attacked members of Congress not deemed conservative enough. Fox News heavily promoted the first tour, even embedding a reporter to cover the trip.

The organization is planning a third tour for the end of March that will culminate in Washington, DC, on Tax Day, its purpose to target vulnerable Democrats and moderate Republicans in the lead-up to the midterm elections. These trips, which include rallies in cities and towns across the country and speeches by political candidates, have proven reliable fundraising vehicles. FEC filings show that Our Country Deserves Better (OCDB), the PAC that set up the Tea Party Express, raised $1.9 million this year, $600,000 more than it took in during the heated 2008 presidential election.

While Tea Party Express professes to be a driving force in the Tea Party movement, it was actually started by a California-based GOP political consulting firm, Russo Marsh & Rogers, which also set up OCDB. OCDB originally focused on attacking Barack Obama during the 2008 election, running ads assaulting the then-candidate for failing to put his hand over his heart during the pledge of allegiance national anthem, and digging up footage of one of Rev. Jeremiah Wright’s heated sermons. Many of OCDB’s principals are also connected to Move America Forward, a conservative group that ran PR campaigns and bus tours in support of the Iraq War during the Bush administration. During this election cycle, OCDB has spent $123,000 on an independent expenditure campaign bashing Senate majority leader Harry Reid, according to the Center for Responsive Politics.

Tea Party Patriots and Tea Party Express have been clashing for months over which group truly represents the movement. A flashpoint came this fall when a member of the Tea Party Patriots’ board, Amy Kremer, switched sides and joined Tea Party Express, allegedly taking the Patriots’ extensive email database with her and locking the rest of the board out of the TPP website. In November, this led the Patriots to go to court to get an injunction against her to reclaim ownership of the group’s electronic resources. The fight hasn’t helped the Patriots’ view of their tea party rivals. In fact, “real” Tea Party activists—i.e., local organizers like Stublen who consider themselves the grassroots heart of the movement—see Tea Party Express as bad for business, as it lends credence to criticism that the movement is nothing more than a sophisticated astroturf scheme or GOP front.

As a result, Stublen has been trying to publicize the group’s GOP ties and discourage Tea Party activists from donating to Tea Party Express. He’s outraged that of the nearly $2 million the group has raised this year, almost half ($857,000) has gone to consulting firm Russo Marsh or people connected to it. He suspects that most donors to Tea Party Express support the movement but have no idea their money is actually going to the very type of mainstream political operation the Tea Partiers oppose. Pointing to the hundreds of thousands of dollars that OCDB has dropped on Tea Party Express advertising, Stublen notes, “None of this is grassroots tea party stuff. But they’re trying to portray themselves as grassroots.”

Indeed, FEC filings show that OCDB spent hundreds of thousands of dollars on advertising for the bus tour, including $225,706 for ads that ran on the Fox Business Network. (The foundering Washington Times is no doubt looking forward to another Tea Party Express tour, as the PAC spent thousands on advertising with the paper during the previous two tours.) There was even $2,000 in speaking fees for Samuel “Joe the Plumber” Wurzelbacher, and a generous $5,000 contribution to the Freedom Works Foundation in July, when the organization, chaired by one-time Republican House Majority Leader Dick Armey, was organizing many of the health care town hall protests. And those buses weren’t cheap. OCDB dropped nearly $50,000 just to adorn them with the Tea Party Express logo.

Earlier this week an incensed Stublen itemized the PAC expenditures and posted them on a Tea Party listserv to make the case that Tea Party Express is just part of the Washington political establishment. Not long after, he says, he got an email from Joseph Wierzbicki III, one of the principals at Russo March, complaining that Stublen was showing liberal stripes with his “anti-corporate” rants. Stublen says he told him he’s not anti-corporate. “I’m anti-deception,” he says. Stublen told Wierzbicki he thought Russo Marsh was using the Tea Party name to dupe people into giving money to a bunch of GOP consultants.

“People think this money is going to the Tea Party movement,” Stublen complains. He says he asked Wierzbicki to put a disclaimer on all of Tea Party Express’ fundraising materials and emails saying that they are not affiliated with any other tea party groups, but Wierzbicki refused. All this has made Stublen one of Tea Party Express’ loudest critics. “I don’t like what I think they stand for,” he says. “These are my opinions, but the bottom line, personally, I think they want to take over the movement, make it their own, and take over the fundraising potential to get their candidates elected.” And in his view, there’s nothing grassroots about that.