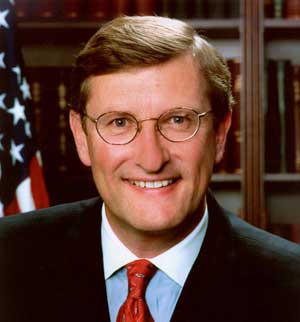 Democrats’ efforts to pass health care reform depend on a filibuster-proof procedural maneuver called reconciliation. If Senate Democrats can use this process to pass a package of adjustments to their version of the health care bill, Speaker Nancy Pelosi says she can muster enough votes to approve the Senate legislation in the House. But for this to work, Sen. Kent Conrad has to be with the program. The centrist North Dakota Democrat chairs the Senate Budget Committee, which handles reconciliation measures. Other centrist Democrats, such as Missouri’s Claire McCaskill, have  expressed qualms about the plan. But in a brief conversation with reporters on Thursday afternoon, Conrad slammed Republican obstructionism and vigorously defended the use of reconciliation to pass important legislation.

The Senate “was not designed to have everything require 60 votes,” Conrad said. “It wasn’t designed to prevent important action on the problems facing the country.” If a supermajority is effectively necessary to pass any piece of legislation, he added, this “puts a great deal of pressure on going to more of a reconciliation process to deal with things.”

Conrad argued that it’s not possible to use reconciliation—which requires merely a straight majority vote—to win passage of an entire comprehensive health care bill, as some progressives have advocated. (There are assorted rules that prevent this.) But Conrad noted that he’s open to using this legislative maneuver to make limited, though significant, changes to a measure the Senate has already passed—provided that certain procedural kinks could be ironed out.

Those procedural issues involve which body would take the opening step in this legislative dance—the House or the Senate. House Democrats want the Senate to pass its changes to its health care measure first. (Otherwise, they could end up voting for a Senate bill containing provisions they don’t like and then get stuck with it, should reconciliation fizzle.) Senate Democrats, however, aren’t sure they can approve through reconciliation changes to a bill that hasn’t yet been approved by the House. “We are being asked to pass a piece of legislation that amends another piece of legislation which does not exist yet,” a Senate aide told Greg Sargent yesterday. “We are having problems with the [Congressional Budget Office] and parliamentarian on that front.” The Senate just wants the House to “back off,” Sargent reported. Parliamentary experts for the Democratic leaders on each side of Capitol Hill are now trying to sort all this out.

Meanwhile, President Barack Obama in his State of the Union speech didn’t provide any guidance on how congressional Democrats should proceed. One House Democratic leadership aide told Mother Jones that the top Democrats on the House side assume that Obama is hesitant to tell the “touchy” Senate how to do its job at such a critical juncture. The absence of any reference to reconciliation in Obama’s speech, he insists, was no indication it is off the table.

Conrad, for one, didn’t sound like a man with doubts about the idea. He said, “Frankly I think we have to reconsider the rules by which this body is governed,” because the Senate “is in danger of becoming dysfunctional,” and “there’s going to be a building demand in the country to change the system.”