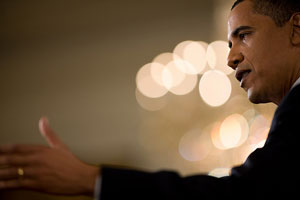 President Barack Obama just finished up a speech in support of Martha Coakley, the Democratic candidate in the Massachusetts special election set for Tuesday to determine who will fill out the remainder of Ted Kennedy’s term in the Senate. Republican candidate Scott Brown spoke at his own rally today, too. The contrast was illuminating. Obama’s speech focused on all the issues where Brown, being a Republican, will almost certainly vote with Senate Republicans: climate change legislation, financial regulatory reform (“He’ll park his truck on Wall Street,” Obama said), and, of course, health care reform. The president’s message was clear: voters should looks past Coakley’s flaws as a candidate (although he didn’t acknowlege them, his very presence in the state spoke to her failings), forget about her gaffes, and focus on her issue positions. Coakley’s positions prove that she would “be on your side,” Obama said.

Brown’s speech, by contrast, had little to do with the issues. There were few GOP dignitaries or officeholders by his side. Instead, sports stars like Curt Schilling and Doug Flutie and actor John Ratzenberger (Cliff from “Cheers”) joined Brown on stage. The cast of characters mirrored the substance—or lack thereof—in Brown’s speech. He spoke about his “underdog” status, his truck (Brown campaigned in a pickup—a tactic Obama repeatedly referenced in his own speech, asking voters to “look under the hood”), and sports.

It’s pretty obvious what’s going on here. Massachusetts voters don’t like Martha Coakley too much. They like the tall, handsome, hangs-out-with-sports-stars Scott Brown. But most Bay Staters aren’t as conservative as Scott Brown issues or beliefs-wise (unlike Brown, they certainly don’t seem to think President Obama was born out of wedlock, for example). So Coakley, Obama, and the Democrats are trying to get voters to focus on the issues. Brown’s trying to get them to focus on narrative: how he’s the “underdog,” he’s cool, he drives a truck, etc. Issue positions are what actually matter when it comes to votes in Washington that affect peoples’ lives. But, unfortunately for Coakley, too often it’s narrative—political mythmaking—that matters most in electoral politics. Barack “Hope and Change” Obama knows that better than anyone. It will be interesting to see what matters most on Tuesday.