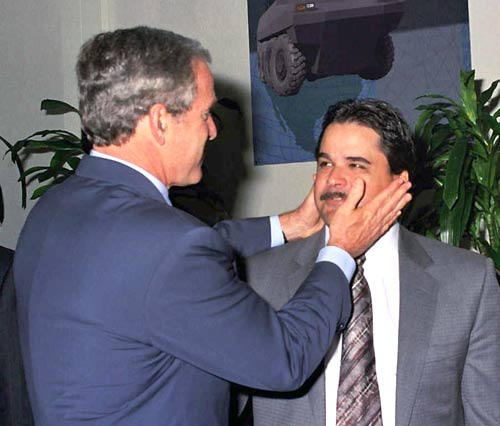 Richard Pombo is back on the political scene. The squat, nepotistic, buffalo-killing, whale-hating, freeway-speculating, junket-taking, national-park-peddling, Abramoff-courting California rancher who became the nation’s worst-ever chairman of the House Resources Committee is running for Congress, three short years after voters booted him from office. Bad sequels aren’t just the stuff of Westerns.

For years, Pombo topped environmentalists’ Most Wanted list. In 2006 the League of Conservation Voters named him chairman of its “Dirty Dozen.” Rolling Stone called him “Enemy of the Earth.” His long-running efforts to gut the Endangered Species Act and open the Arctic National Wildlife Refuge to oil drilling ultimately came to naught, but he pushed through Bush’s Healthy Forests Initiative and effectively derailed a government investigation of Pacific Lumber owner Charles Hurwitz, then the nation’s leading logger of old growth redwoods. In 2006, Defenders of Wildlife chipped in more than $2 million to help Democratic novice Jerry McNerney unseat him.

The political winds had been changing in Pombo’s Central Valley congressional district as it became a bedroom community for the San Francisco Bay Area. Yet his environmental record probably hurt him less than his ties with disgraced lobbyist Jack Abramoff. In an election year fixated on corruption, Citizens for Responsibility and Ethics in Washington named him one of the 13 most corrupt members of Congress.

Since then, Pombo has stayed true to form. In 2007, he took the reins of the Partnership for America, an organization funded by utilities, oil, coal, mining, logging, and agricultural groups that sought to gut the Endangered Species Act (it now appears defunct). Around the same time, he became a senior partner at Pac/West Communications, a PR firm that had held a fundraiser for him and created Astroturf groups to trumpet support for his plans to strip environmental laws. The Pac/West website tries to put a greener face on Pombo, featuring a Q&A in which he gushes that Africa’s “natural beauty and abundance of wildlife is awesome.”

Rather than challenging McNerney to a rematch, Pombo intends to replace retiring GOP congressman George Radanovich in a district deeper in the Valley. He’ll face fewer environmentalists there but more friction from business interests and his own party. Radanovich and the California Chamber of Commerce have already endorsed State Sen. Jeff Denham for the job. And Denham’s success fending off a 2008 recall effort pushed by leading California Democrats earned him points with the party faithful. Still, Pombo counts deep political connections in Washington. It may be a close race, and it will be interesting to see if and when environmental groups wade into the fray.