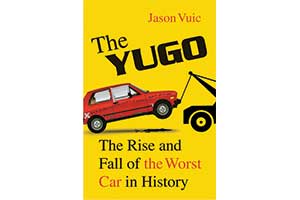 Jason Vuic, a professor of modern European history, could easily have written a straightforward takedown of the most maligned automobile since the Ford Pinto. Instead, he uses the Yugo as a vehicle for an insightful and witty look at car culture, a half-century of Balkan history, and the last decade of the Cold War.

Though it sold in the United States for only six years, the Yugo captured Americans’ collective imagination—and not in a good way. Its countless defects ranged from the comic (driver’s seats that dropped unexpectedly from their hinges) to the deadly (one was blown off a Michigan bridge). Happily, Vuic has an encyclopedic knowledge of Yugo jokes (Q: What’s included in every Yugo owner’s manual? A: A bus schedule).

Humor aside, Vuic argues that anxiety about communism and its consumer products helped ensure the Yugo’s commercial failure. It was only the third car made behind the Iron Curtain to be imported into the States; remember the Czech Skoda or the Russian Moskvich? But what ultimately sank it was its marketers’ miscalculation of how much Americans would give up for a bargain. The Me Decade demanded flash, and the Yugo was a “humble, almost fundamentalist product” with no frills to spare. Though it only captured less than half a percent of the American market, Yugo remains a household name—a Slavic synonym for “flop.”