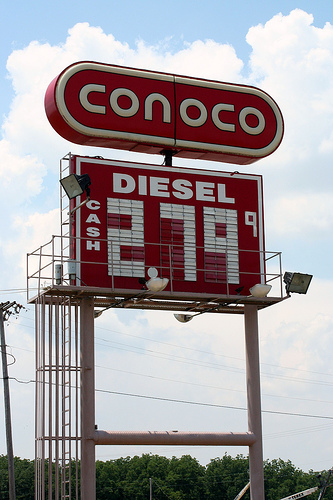 The departures highlight some of the tensions that arose in the coalition as the debate over climate legislation played out. While USCAP was touted as evidence of the ability of environmental groups like Environmental Defense Fund, the Natural Resources Defense Council, and World Resources Institute to work with energy companies like Duke and Shell, some differences between the members became clear when there was actual legislation on the table. And with legislation stalled out in the Senate, the departures don’t offer much hope for partnership between fossil fuel giants and environmentalists on a path forward.

As I reported last August, ConocoPhillips urged people to contact their senators and express opposition to the House climate and energy bill while still a member of a coalition supporting its passage. The House bill would not do enough to protect domestic oil refiners, and does not do enough to encourage development of natural gas, they argued (the company also happens to be the among the country’s largest producers of natural gas). ConocoPhillips is also a member of the American Petroleum Institute, which orchestrated astroturf campaigns against the climate bill.

Caterpillar also faced similar criticism last year for being a member of both USCAP and the American Coalition for Clean Coal Electricity, the coal front group also campaigning against the legislation.

In a statement, USCAP downplayed the departures. “USCAP is a CEO-led organization whose membership changes periodically,” it said in a statement. “In fact, over the past seven months, USCAP has added three new corporate members – most recently in late October – and expects to add new members in the coming month.”

The aerospace company Honeywell and power companies Alstom Power and AES both joined the coalition last year. But the departure of the two oil giants means that Shell is the only oil company left in the coalition. The partnership with Big Oil was among the group’s selling points. And ConocoPhillips was once publicly enthusiastic about climate legistion. Red Cavaney, senior vice president for government and public affairs for ConocoPhillips, even testified before the Energy and Commerce Committee in support of climate action last April. But here’s what CEO Jim Mulva had to say about leaving the group:

House climate legislation and Senate proposals to date have disadvantaged the transportation sector and its consumers, left domestic refineries unfairly penalized versus international competition, and ignored the critical role that natural gas can play in reducing greenhouse gas emissions. We believe greater attention and resources need to be dedicated to reversing these missed opportunities, and our actions today are part of that effort. Addressing these issues will save thousands of American jobs, as well as create new ones.

He doesn’t mention what, if anything, the company plans to do to stay involved in the climate debate. It sure seems like leaving the coalition signals that they’re giving up on finding a path forward with environmental groups. The Senate bill is expected to make major concessions to the oil industry, including making more areas of the country available for drilling. But whether Big Oil will play along remains to be seen.