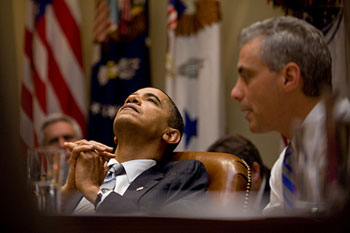 Republican and Democratic leaders in Congress are scheduled to meet with President Barack Obama on Thursday for a televised health care “summit” that has been billed as a last-gasp attempt to cobble together some sort of bipartisan compromise on health care reform. On Monday morning, in advance of that meeting, the White House released a package of suggested tweaks that Democrats hope will “fix” the Senate health care bill so that it can pass the House. This “tweaked” Senate bill will presumably serve as a sort of baseline for Thursday’s discussion. You can expect the President to say something like, “Here’s our proposal. It contains a lot of your ideas. What’s your proposal?”

Republicans have bashed the president for issuing a plan before the televised summit, claiming that the meeting is a “trap.” But two weeks ago, Reps. Eric Cantor (R-Va.) and John Boehner (R-Ohio) demanded that if Obama planned to offer a legislative proposal at the summit, he should post it online 72 hours beforehand. So that’s what the White House has done.

You can read the administration’s proposal here. Kevin has some of the most important details, and the Atlantic‘s Marc Ambinder has a long-ish summary, but I’m going to focus on the political implications.

Here’s where we stand: Both the House and the Senate have already passed health care reform bills. But they’re different bills, and the president can’t sign a bill into law until both houses of Congress have agreed on one bill.

It’s widely acknowledged that neither chamber can pass the other chamber’s bill unchanged. So the Democrats have largely settled on having the Senate pass a package of changes to its bill and hoping those changes will be enough to let the bill pass the House.

If Republicans try to use the filibuster to block the Senate from changing its bill, Democrats will try to push the changes through using the majority-vote, filibuster-proof “reconciliation” process. Once those fixes are made, the House will try to pass the “fixed” Senate bill. That leaves two  major obstacles. Harry Reid, the Senate majority leader, needs to find 50 Democrats who are willing to vote for the tweaks (Vice President Joe Biden would be the 51st vote). And Nancy Pelosi, the Speaker of the House, needs to make sure she has enough votes to pass the tweaked Senate bill.

For now, Reid’s task looks easier. Mitch McConnell, the Republican minority leader, has said that it’s “not clear” whether his caucus can block the Democrats’ use of the majority-vote reconciliation procedure.

Pelosi faces a tougher challenge. The first time around, health care squeaked through the House by just five votes. Since then, Pelosi has lost two “yes” votes: Rep. Robert Wexler (D-Fla.), who retired in January, and Rep. John Murtha (D-Penn.), who died on February 8. And Rep. Joseph Cao (R-La.), the only Republican to vote for the bill the first time, probably won’t vote for it again. That means that Pelosi really has to get all her ducks in a row if she’s going to pass the Senate bill. Does Obama’s proposal do anything to make her job easier?

The first crucial bit of news is that the president’s plan anticipates no changes to the Senate bill’s abortion language. As I have written previously, a small group of Democrats who oppose abortion rights but voted for the House’s first health care bill are crucial to passing the final bill. Congressmen led by Rep. Bart Stupak (D-Mich.), who authored the House bill’s tough anti-abortion language, have threatened to vote “no” on the final package if it includes the Senate’s abortion provisions. By refusing to plan on altering that language, Obama is calling their bluff. He’s also acknowledging what most of them already know—Senate rules don’t allow changes to the abortion language under the majority-vote procedure. Pelosi is going to have to manage Stupak et. al.’s disappointment—or convince some Democrats who voted no on the initial bill to change their minds in order to offset the loss of Stupak’s bloc.

The second part of the president’s plan that will affect Pelosi’s vote-counting is the modifications he’s proposed to the excise tax on high-cost “Cadillac” health insurance plans. House Democrats loathe the “Cadillac” tax because they think it hits middle class families (and union households) too hard. So the president has proposed raising the threshold at which the tax kicks in to $27,500 for a family plan—up $4,500 from the original Senate bill. He’s also suggested delaying the tax’s onset by five years, to 2018. The fate of health care reform probably rests on whether those changes are enough to win over House Democrats. We should know more about that later today, after they meet for a closed-door caucus meeting.