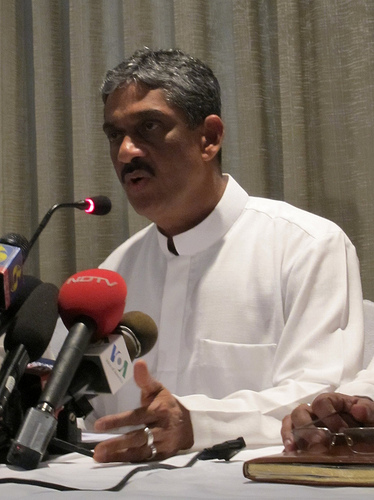 It’s been a busy February for newly reelected Sri Lankan President Mahinda Rajapaksa: Just two weeks after defeating ex-General Sarath Fonseka in the polls on January 26th, he had his arch rival physically carted from his office and placed under arrest for sedition. Then, he dissolved Parliament. It seems no amount of pleading by the UN  or India’s Manmohan Singh can get Sri Lanka to just chill out.

Rajapaksa and Fonseka were always an odd couple: closely allied during last spring’s final campaign against the separatist Tamil Tigers (LTTE), the two men fell out after the war, each accusing the other of taking sole credit for the Tigers’ defeat. After trading accusations of war crimes through the summer and fall, the President “promoted” the General to a largely ceremonial position last winter. Fonseka quit, and shortly thereafter, declared his intent to unseat his rival.

That’s when things got really weird. Both Fonseka and Rajapaksa are suspected by international agencies of having committed war crimes during the spring campaign; both are open Sinhalese nationalists. Yet, with little trouble, Fonseka managed to secure the backing of a coalition of minority parties, including the Tamil National Alliance, a crucial ally. In the elections, he carried the largely Tamil provinces of the North and East, but lost the national vote by 17 points.

Then day after the elections, rumors began to fly that the General had plotted with army officers to murder the President and his family. Fonseka’s campaign headquarters were searched and several campaign workers arrested.  For the last 24 hours, the General was kept in an undisclosed location, though India’s Hindustan Times is reporting that Fonseka’s wife, Anoma, was allowed to see her husband for the first time today, bringing him a change of clothes and his inhaler. Many critics fear arresting the losing presidential candidate and dissolving Parliament sends the wrong message to a country that just ended a 26-year-long civil war. That’s putting it mildly.