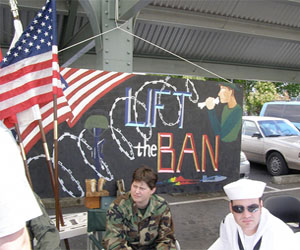 When Admiral Mike Mullen, the Joint Chiefs chairman, blew everybody’s mind this month by advocating an end to “Don’t Ask, Don’t Tell,” it was easy to be skeptical. Perhaps you suspected, like John McCain and Ted Nugent, that Mullen wasn’t speaking for the military’s rank-and-file members. After all, the all-volunteer force isn’t widely recognized as a progressive institution.

That may be changing, though. On Wednesday, Military Times released results of a services-wide poll that showed officers and enlisteds across all four branches are more accepting of gays in their ranks, and less comfortable than ever with DADT. That gels with today’s anecdotal story that no subordinates are calling Mullen out on DADT in his occasional Q-and-A sessions with them.

The poll requires some qualification: slightly more than half of the 3,000 respondents still said they oppose repealing the current law. Nevertheless, support for full gay equality is higher than in Military Times‘ previous polls. Maybe it’s because so many of the service members they spoke to admitted being gay: by the paper’s figures, there are three times as many lesbians in the military as there are in society at large.

Don’t be too surprised: Any institution that employed the likes of Woody Guthrie, Howard Zinn, Johnny Cash, and Hunter S. Thompson can’t be entirely retrograde. As one airman told the AP today: “The U.S. military was always at the forefront of social change. We didn’t wait for laws to change.”