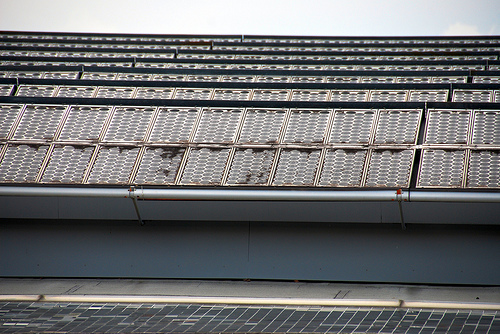 How toxic are your solar panels? The Silicon Valley Toxics Coalition (SVTC), a group that has done more than any other to clean up the electronics industry, attempted to answer that question today with the release of its Solar Scorecard. It didn’t get very far. Of the 25 solar manufacturers that SVTC contacted, only 14, which together represent just 24 percent of the solar market, even responded. And their answers weren’t always heartening. Among SVTC’s findings:

That many solar panels contain lead and cadmium, which are being phased out by computer manufacturers, is no small matter. In the coming years, SVTC estimates that 1.5 billion pounds of solar panel waste containing 2 million pounds of lead and 600,000 pounds of cadmium will be disposed of in California alone.  Some older solar panels are already being ditched well ahead of their 20-year lifespans as cheaper, more efficient versions hit the market. Nevertheless, even the stringent recyling laws of California and Europe exempt solar panels (though Europe’s may soon include them). SVTC wants to see solar panel recycling become standard practice along with efforts by solar manufacturers to phase out toxins. “In order for a product to be really green,” says SVTC executive director Sheila Davis, “it needs to be green throughout its entire lifecycle.”