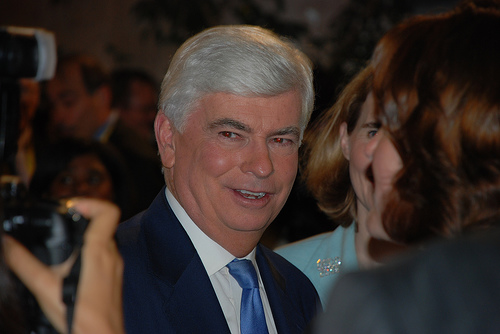 In just six months, Sen. Chris Dodd (D-Conn.), the stately front man of the Senate’s campaign to crack down on Wall Street, has transformed from financial-reform avenger, scourge of the Federal Reserve, and ally of the average consumer to a GOP pushover. Last fall, the veteran Senator and chairman of the banking committee opened financial reform talks as if shot out of a cannon: He rallied around an independent consumer-protection agency, labeled the Fed’s regulatory efforts “an abysmal failure,” and proposed a super regulator who would rein in banks and lenders, instead of the existing muddle of offices that let the worst financial crisis in a generation unfold under their noses. “Dodd is basically starting out by out-reforming the administration,” a congressional staffer told the Washington Post.

Now, Dodd appears to have switched his focus from out-reforming the White House to out-compromising just about everyone. As the Senate banking committee prepares to release a draft of a comprehensive reform bill as early as this week, Dodd has repeatedly conceded to his Republican counterparts on key issues, almost guaranteeing that the Senate’s measure will be far more lenient on the banking industry than the legislation the House passed in December. (A spokeswoman for the banking committee didn’t respond to an interview request for this story.) Dodd’s willingness to appease Republicans like Sen. Bob Corker (R-Tenn.), the main GOP negotiating partner, and Sen. Richard Shelby (R-Ala.), the banking committee’s ranking member, has disappointed Dodd’s fellow Democrats and reform advocates who urge a tougher crackdown. “Those who are arguing for real reform,” says one Democratic aide involved in the issue, “are arguing, ‘Why even compromise if they’re going to oppose it anyway? Why are you negotiating against yourself?'”

Democrats disappointed with Dodd are particularly upset with his concessions on an agency to protect consumers from risky financial practices like predatory lending or unscrupulous credit card rules. Dodd insisted in October that there “needs to be an independent agency that looks out for people.” But his support for an autonomous agency has been eroding quickly.

Last week, for instance, a two-page draft (PDF) from Dodd’s office was leaked to the press laying out a watered-down proposal for a Bureau of Financial Protection that would be housed within the Treasury Department, rather than established as a standalone agency. Democrats and consumer advocates immediately panned the plan. Rep. Barney Frank (D-Mass.), chairman of the House Financial Services Committee, tells Mother Jones the proposal was “weaker than I was hoping.” He openly questions why Dodd is setting the bar so low if the GOP plans to block reform anyway. “We can’t anticipate what they’re going to try to pull,” Frank says, referring to the Republicans. “At very least, let [Republicans] try to kill the whole bill rather than [accepting] something that was watered down.”

Then, on Monday, another proposal for a consumer agency surfaced from Dodd that was even more perplexing. This time, the senator suggested housing a consumer agency within the Federal Reserve—the opaque, deeply unpopular institution that Dodd himself has previously lambasted for its failure to monitor banks and safeguard consumers from dangerous or unscrupulous practices. Yet Dodd now wants to put consumers’ well-being in the Fed’s hands—apparently to build goodwill with his GOP co-negotiator, Corker, and drum up bipartisan support for his bill.

But it’s questionable whether a Fed-based consumer agency will even attract much Republican support beyond Corker. Shelby, who was Dodd’s main GOP negotiator until mid-February, is a fervent critic of the Fed, pointing to its “history of failure in supervision and regulation.” In June, Shelby said, “I do not believe that we can reasonably expect the Fed or any other agency to effectively play so many roles.” (Shelby, for his part, has proposed placing a consumer agency within the Federal Deposit Insurance Corporation.)

Other Republicans on the banking committee, including Sen. Jim Bunning (R-Ky.), have also blasted the Fed’s oversight record. It’s unlikely GOPers will support handing more consumer-protection powers to an institution that’s been the target of attacks by their colleagues and conservative activists. Not to mention that consumer advocates also hate the idea. “The Fed did not just botch it; they really contributed to the mess by not doing anything at all when they could have,” says John Taylor, president and CEO of the National Community Reinvestment Coalition.

Another key element of financial regulation in question is derivatives regulation. Derivatives are financial instruments that derive their value from the price of commodities like oil and corn. Right now, they’re largely traded “over the counter,” meaning in the dark without public information on trading prices or the number of trades going on. A goal of derivatives reformers is to move that opaque trading process into more transparent, standardized clearinghouses, a stipulation that Dodd included in his November draft of financial reform. But a Senate aide with knowledge of the negotiations says Dodd is backing down on this crucial element of financial reform as well.

This aide says the banking committee bill could include a so-called end-user loophole in its derivatives regulation—an exemption from regulation for airline, utility, or other companies who use derivatives for their own businesses to hedge risk and compensate for fluctuations in, say, oil and other commodity prices. But if the Senate allows this exception, it will effectively exempt almost two-thirds of the $800 trillion global “over-the-counter” derivatives transactions that lawmakers are trying to shed light on, according to data from the Congressional Research Service. Moreover, a majority of derivative players exempted would be companies that aren’t necessarily using derivatives for risk management but for outright betting on the financial markets.

Dodd seems to be doing what he believes is necessary to win over Senate Republicans who are resistant to comprehensive financial reform. When the Connecticut senator announced in January that he plans to retire at the end of the term, some wondered whether freeing himself from the burden of re-election might allow Dodd to pursue a bill he thought would best fix our financial markets, not one that was merely politically palatable. The question, then, facing Democrats and consumer advocates who want tougher reform is: How low will Chris Dodd go?