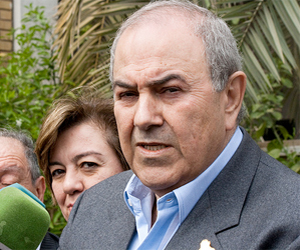 As Mother Jones reported last week, the political future of Iraq didn’t get any clearer with the results of its early-March parliamentary elections. One surprise, though, was the strong showing of ex-prime minister Ayad Allawi, a former strongman for Saddam Hussein’s Ba’ath Party who had forged an alliance of secular Sunnis and Shiites. Allawi’s Iraqi National Accord gained 91 seats, a “thin plurality” that was two seats better than the current prime minister, Nuri al-Maliki, and his Shiite coalition. As regional expert Juan Cole noted today, it’s unlikely Allawi has an easy path to resuming his old position, but he’s clearly become—once again—a heavy player in Iraqi politics.

All of which makes it worth asking: Is Ayad Allawi a stone cold killer?

Joshua Holland over at AlterNet seems to think so. He cites a 2004 report by Australia’s Sydney Morning Herald that alleges Allawi personally shot six insurgents in the head, against a Baghdad wall, with a pistol—just days before the US-led coalition officially handed power over to his government. At the time, US and Iraqi officials laughed off the Herald’s account, and the story died out with next to no coverage in the Western media. Still, the Herald’s account was meticulously reported, based on the accounts of two eyewitnesses who led reporter Paul McGeough to the site of the alleged execution. They maintain that there were roughly 30 witnesses to the event, including the then-interior minister, Falah al-Naqib, whose home in Samarra, Iraq, had been hit by insurgents not long before the incident.

One of the witnesses told McGeough: “The prisoners were against the wall and we were standing in the courtyard when the Interior Minister said that he would like to kill them all on the spot. Allawi said that they deserved worse than death—but then he pulled the pistol from his belt and started shooting them.”

The Herald report went on to list the supposed names of three victims: Two appeared to be Syrian, consistent with the likelihood that they were foreign “jihadist” fighters; the third had a name that indicated he was from Samarra, where the attack on Naqib’s house had claimed the lives of four bodyguards.

Those allegations are difficult, if impossible to substantiate; the bodies are said to have been dumped near the infamous prison at Abu Ghraib, and the Iraqi government declined to give McGeough further details on the prisoners. But the fact that such a rumor could persist is itself evidence of Allawi’s public image: Even the staid New York Times has discussed his legendary brutality streak (“Bring me an ax,” Dexter Filkins chillingly quotes him as saying), and stories persist that he has a history of violence under the guise of the Iraqi secret service, the Mukhabarat, and even the CIA. While little can be proven, the persistent rumors of Allawi’s double dealings with Western intelligence agencies, as well as his own purported role in car bombings and shootings, make it unclear just how much political legitimacy he could have in an Iraqi government coalition.

[A]s Douglas Valentine wrote in Counterpunch: “According to published reports, Allawi began his career in the killing business in the 1960s on behalf of Saddam Hussein; but in 1978, he switched to the CIA after Hussein tried to kill him. In 1991 Allawi co-founded an anti-Saddam, CIA-front organization, the Iraqi National Accord (INA), which the New York Times described as ‘a terrorist organization.'” When he assumed the office of interim Prime Minister, some European papers routinely refer to Allawi as a “former assassin,” or in similar terms.

In in a 2004 profile, The New Yorker‘s Seymour Hersh wrote that he’d unearthed evidence proving Allawi had participated in those early killings to benefit Saddam’s Ba’athist regime in the West:

“If you’re asking me if Allawi has blood on his hands from his days in London, the answer is yes, he does,” Vincent Cannistraro, the former C.I.A. officer, said. “He was a paid Mukhabarat agent for the Iraqis, and he was involved in dirty stuff.” A cabinet-level Middle East diplomat, who was rankled by the U.S. indifference to Allawi’s personal history, told me early this month that Allawi was involved with a Mukhabarat “hit team” that sought out and killed Baath Party dissenters throughout Europe.

As Counterpunch states, Allawi flipped sides after a falling out with the Saddam regime; the New York Times reported extensively in 2004 on Allawi’s subsequent CIA ties, and his possible connection to the bombing of schoolchildren:

Iyad Allawi, now the designated prime minister of Iraq, ran an exile organization intent on deposing Saddam Hussein that sent agents into Baghdad in the early 1990s’s to plant bombs and sabotage government facilities under the direction of the CIA, several former intelligence officials say. Dr. Allawi’s group, the Iraqi National Accord, used car bombs and other explosives devices smuggled into Baghdad from northern Iraq… One former Central Intelligence Agency officer who was based in the region, Robert Baer, recalled that a bombing during that period ‘blew up a school bus; schoolchildren were killed.’… Other former intelligence officials said Dr. Allawi’s organization was the only resistance group involved in bombings and sabotage at that time. But one former senior intelligence official recalled that “bombs were going off to no great effect.” “I don’t recall very much killing of anyone,” the official said.

Noted regional expert Juan Cole, a University of Michigan professor who blogs on pan-Arab and Islamic affairs at Informed Comment, tells Mother Jones he doesn’t know of “anything special about Allawi’s alleged execution of prisoners,” but he adds that the former prime minister’s sordid early activities are well-known. “I know that he was a CIA asset charged to recruit the Iraqi officers who broke with Saddam and fled to Europe,” Cole writes. “Some of this work has shown up in open sources. Amazingly, the CIA connection has not put him beyond the pale in Iraqi politics, possibly because virtually everyone was trying to get rid of Saddam any way they could and with whatever outside alliances could be found.”

All of this amounts to little more than a circumstantial case—though a pretty strong one, sustained over more than 30 years—that Allawi is a certifiable bad dude. But perception is reality in politics, and Iraqi politics is like politics anywhere—only more so.