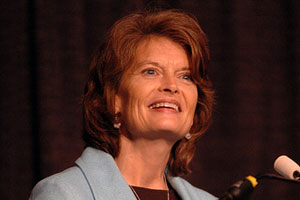 Lisa Murkowski is the rare Republican senator who not only acknowledges that global warming exists but says she wants to do something about it. She likes to point out that her home state of Alaska is “ground zero for climate change”; about two years ago, she championed a bipartisan bill to rein in carbon emissions. In a party where Oklahoma Sen. Jim Inhofe—who calls global warming the “greatest hoax ever perpetrated on the American people”—is the preeminent Republican voice on climate, Murkowski’s views stand out. After President Barack Obama took office, environmentalists and Democratic lawmakers courted Murkowski enthusiastically, hoping she’d be a crucial GOP vote for historic legislation to deal with global warming.

But while Murkowski’s climate stance may differ from GOP orthodoxy, it’s become increasingly difficult to distinguish her actions from those of her denialist colleagues.

Like every Republican senator except Lindsey Graham and Susan Collins, Murkowski hasn’t joined any of the current congressional efforts to curb carbon pollution. Instead, she’s gone on the offensive against the White House’s signature environmental initiatives. She has launched an assault on the Environmental Protection Agency’s (EPA) authority to regulate carbon dioxide. Murkowski has also made it plain that the price for her vote on any climate bill is a lengthy list of handouts for the oil and gas industries. Murkowski once seemed to represent a new voice on climate change among congressional Republicans—but she’s now their most effective obstructionist.

Murkowski’s climate stance embodies the political paradox of Alaska. In the Last Frontier, oil is king and senators from both parties cater to their industrial backers, but Alaska is also one of the states most imperiled by rising temperatures. Murkowski was appointed to the Senate in 2002 to finish her father’s term when he became governor, and campaigned heavily on her support for the oil and gas industry in her 2004 reelection bid. But in 2006, she broke with most of her Republican colleagues on the subject of climate change, observing, “I believe it is a reality that man is contributing to the current warming trend. Accordingly, it is appropriate, and quite frankly our responsibility, to take steps to curb the growth of greenhouse gases.”

With only a handful of Republicans acknowledging that global warming is occurring, Murkowski quickly assumed a major role in shaping climate policy. On the Energy and Natural Resources Committee, where she is the ranking GOP member, she has worked closely with Sen. Jeff Bingaman (D-N.M.), the chairman, on energy-efficiency measures. In 2007, she cosponsored Bingaman’s cap-and-trade bill, the Low Carbon Economy Act.

But after Obama took office—creating the possibility that a climate bill might actually become law—Murkowski’s enthusiasm for tackling global warming quickly cooled. In March 2009, she resisted a decision by the Bush administration’s Interior Department to list the polar bear as a species endangered by climate change, citing fears that the designation could threaten oil and gas development in Alaska. Last September, she introduced legislation—written with help from two lobbyists for big polluters—to prevent the EPA from regulating greenhouse gas emissions. After that bid failed, she offered another measure in January seeking to block EPA carbon rules.

Then, this month, Murkowski provided a 91-page document to Lindsey Graham listing the oil and gas measures she’d like to see included in a climate bill. Chief among them was a demand that the Arctic National Wildlife Refuge be opened to oil drilling—a poison pill for environmentalists who have battled for decades to protect the pristine 19.6 million-acre natural reserve. Other requests included allowing drilling up to 35 miles off the US coastline and weakening the environmental review process for oil and gas operations. “To secure my vote on a climate bill, we have to develop a good policy,” she told reporters. “In my mind, that good policy would include [drilling in] ANWR.”

For a long time, environmental groups had been reluctant to criticize Murkowski publicly, hoping that she might yet be won over. But with her bid to insert ANWR drilling in the climate bill, their patience has expired. “We’ve been giving her the benefit of the doubt in our thinking for some time,” says David Jenkins, vice president for government and political affairs at Republicans for Environmental Protection. “For her to throw [ANWR] out there as a price for her vote on climate shows that she’s really not serious about addressing the problem.” He now believes her statements calling for action on global warming are “just lip service,” concluding, “She has no intent to do anything about the climate.”

Murkowski’s ANWR gambit, says Melinda Pierce, a lobbyist for the Sierra Club, is the “mother of all nonstarters”—especially considering that one of the bill’s authors, Joe Lieberman, has described ANWR drilling provisions as a “dealbreaker.” Robert Dillon, a spokesman for Murkowski, maintains that Graham had asked them to list provisions they’d like to see in a bill and suggested they include ANWR drilling. Dillon added, “Graham seems to be throwing our boss under the bus a bit.”

As for her move against the EPA, Murkowski claims that it was motivated by a concern that greenhouse-gas regulations would cripple the Alaskan economy. But two of her biggest contributors are Edison Chouest Offshore and Exxon Mobil, which have significant oil and gas interests in her state. Murkowski is also heavily backed by coal-powered electric utilities—like Maryland-based Constellation Energy and Georgia-based Southern Company—which don’t have strong Alaska ties but wouldn’t fare well under carbon constraints.

Instead of regarding Murkowski as a potential ally, environmental advocates are now wondering whether she’s simply using her influential position to stump for polluters. The National Wildlife Federation and Friends of the Earth have started running attack ads against her in Alaska, highlighting her ties to lobbyists and fossil-fuel interests. “I’ve been in meetings where she admits that global warming is a problem,” says Pamela Miller, Arctic program director at the Northern Alaska Environmental Center. “I think she uses that to make herself seem reasonable, but then she makes these outrageous suggestions.”

Yet although environmentalists are now wary of Murkowski, she’s still being included in key negotiations. In early March, Murkowski was one of six GOP senators invited to the White House to meet with Obama and other lawmakers to discuss how to formulate a climate bill that could clear the Senate. She described the talks as “encouraging” and shortly afterwards put her attempt to block the EPA on hold. But she still refuses to support any existing climate legislation. “I think she’s very interested in trying to see if there’s a way to get the problem solved,” says Bingaman. “I don’t know that she’s expressed any willingness to embrace the current cap-and-trade proposals that have been put forward.”

For her part, Murkowski insists that she still believes climate change is a significant concern—so significant that Congress shouldn’t act too fast to address it. “I think it is too important an issue to rush and get wrong,” she said. “The devil is always in the details, and those details are a long way from resolution.”

Murkowski’s stance comes as cold comfort to Alaskans who are already watching their communities melt. On the same day that she met with Obama, a group of Alaska natives was visiting Washington, DC, to plead with legislators to protect their homeland from climate change. Robert Thompson, a member of the Iñupiat tribe and the board of directors of Resisting Environmental Destruction on Indigenous Lands, says his family’s property along the coast in Kaktovik has receded 100 feet in recent years, a result of waves lapping at the thawing permafrost. “Land that’s been there for millions of years, just washed away,” said Thompson, a middle-aged man sporting a polar bear bolo tie. The iconic white bears, he says, are wandering into town to rummage through dumpsters for food; Porcupine caribou and musk ox are disappearing.*. Inland lakes are drying up and forest fires grow worse every year. Last month, it rained—something that never happened during the winters of his youth.

Kaktovik sits at the tip of an island off the coast of northeastern Alaska—within ANWR’s boundaries. Thompson pointed to the problem with Murkowski’s push for oil drilling to be included in the climate bill. “It’s contradictory that you’re going to advocate for drilling in something related to climate,” he says. “That’s the problem that’s causing the climate to change.”

*Correction: This story originally referred to porcupines and caribou, not Porcupine caribou.