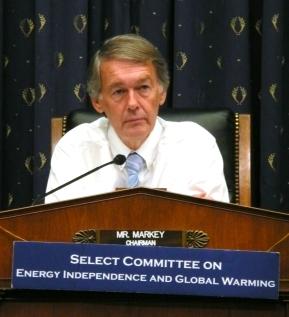 One House Democrat is sending signals that the Obama administration should take a more cautious approach to its big plans for a nuclear revival in the US. Via The Hill, we learn that Ed Markey (D-Mass.), one of the co-authors of the House climate bill and the chair of the energy and environment subcommittee, last week sent a letter to the Government Accountability Office asking it to review the process for permitting new nuclear plants and extending the permits for older plants.

Markey lists concerns about the potential costs of expanding nuclear power, and worries that cost concerns might lead to compromised safety. The Obama administration has been unwillling to provide many details on anticipated costs for the expansion, though it appears that that Department of Energy Secretary Steven Chu is grossly underestimating the fiscal realities of the nuclear industry.

Markey directed the GAO to study fiscal cocerns about a nuclear expansion, noting that “the cost of a new nuclear reactor often exceeds the total market capitalization of the companies seeking to build them.” He notes that “industry cost estimates have historically been vastly underestimated,” and that there are constraints on the ability to obtain reactor components and skilled workers because the industry has been stalled for nearly three decades. “As a result, there is a danger that high costs, long construction times, and procurement complications may cause licensees to prioritize speed of completion over safety of construction,” he writes.

Nuclear power, Markey writes, “has been offered by some as one answer to the escalating crisis of global warming,” but he warns that safety concerns about new nuclear plants could dwarf that potential impact, since “a catastrophic accident at a nuclear plant would pose a threat to the public health and safety many orders of magnitude more severe than at any other type of power plant.” He lists earthquakes, severe weather events, and even climate change impacts like coastal flooding and constraints on water resources as concerns that the NRC should take into account as it evaluates permits.

Safety concerns about the new generation of nuclear are already an issue in the nuclear revival. Even the design proposed for the first recipient of a loan guarantee in this planned renaissance, a two-reactor expansion at the Vogtle site in Georgia, has not received a permit and probably won’t until late 2011. The Nuclear Regulatory Commission (NRC) last October cited significant safety concerns regarding the design proposal for the Westinghouse AP1000 reactors that are slated to be used for the Georgia project and six others around the country, noting that the commission did not believe that the shield design was sufficient to withstand earthquakes, tornadoes, hurricanes, and airplane crashes. Questions have also been raised about extending the life of existing plants, after Vermont recently rejected a request to add more years to the life of the Yankee plant amid concerns that the owners had misled regulators about the reactor’s safety.

With the Obama administration and the Senate moving ahead full-bore on plans to flood money to the nuclear industry, it might be an excellent time for the GAO to weigh in on these outstanding fiscal and safety concerns that Markey notes.