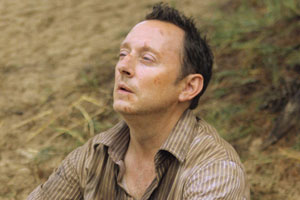 Benjamin Linus: Mass murderer, master manipulator, power-hungry baddie…sympathetic good guy? Last night’s episode of Lost threw a redemptive curveball by humanizing one of the show’s most iconic villains. Plus, we got Jack embracing faith, Miles playing tattle-tale, and Richard attempting to rid the island of his guyliner once and for all.

To help us unpack the ep, we invited Ms Terri from the great “Lost For A Reason” blog to join us. Read the chat below, and stay tuned for more surprise guests in the coming weeks.

Nikki Gloudeman: Hey guys!
Ms Terri, Lost blogger: Hi!
Nikki: Thanks for joining us Ms Terri!
Ms Terri: Thank you for inviting me!
Nikki: So, last night was pretty emotional, yeah? I actually felt genuine sympathy for a guy who once gassed his dad and killed a community of people. A testament to Michael Emerson’s acting, I think.
Ms Terri: Yeah, I got choked up.
Nikki: Me too! Not ashamed to admit it. I also think more firmly now that Jacob is good and MIB is bad.
Laurin Asdal, Director of Development: Agreed.
Jennifer Phillips, Assistant Editor: Yes, MIB was definitely trying to play on Ben’s love of the island to recruit him.
Laurin: And his love of power.
Nikki: It’s interesting because I’ve always thought of Jacob as fate, and yet this episode demonstrated that he’s also very much about choices.
Laurin: I think they are both about choices but I’m getting the cliché devil on one shoulder, angel on the other image now.

Ms Terri: I wondered about sideways Locke. Before this episode, sideways Locke seemed like a good guy. But here Locke was egging Ben on, to go for the power, in both timelines.
Jen: Maybe the island doesn’t bring out the best in people…
Nikki: Maybe Locke will be impacted by Flocke (Faux Locke) in sideways world. Since decisions are clearly linked between worlds.
Jen: Clearly, in both worlds, everyone has massive daddy issues.
Laurin: yeah but sideways Locke was more about empowering where Flocke was trying to get Ben drunk with power in a way. Exploiting it.
Ms Terri: Oh, that’s interesting! A bit of Flocke in Sideways Locke.
Nikki: I’ve also seen a bit of Locke in Flocke.
Jen: “Don’t tell me what I can’t do!”
Ms Terri: Yes, “don’t tell me what I can’t do!” Plus Flocke tripped in the jungle, falling on his face, just the way that Sideways Locke had done on his lawn.
Nikki: Jen, regarding daddy issues, I think we’re seeing less daddy issues in sideways world. Or at least overcoming them. Jack and his son, Locke and his dad have a better relationship…and Ben and his dad.

Jen: Jack is becoming more of a man of faith all of a sudden.
Laurin: To trust Jacob with his life vis-a-vis the dynamite was big.
Nikki: Yes, that was a complete turnaround. It also seems we have the camps pretty much fleshed out now. And interestingly the camps the characters have chosen mirror their sideways lives perfectly. Kate was torn between good and bad in her sideways world and is here too. The others were either flat out good or bad, as echoed in which camp they fall in on the island.
Laurin: Which begs the question, will Sun go with camp Jacob? Or MIB?
Jen: Whoever can get her to Jin wins.
Laurin: She leaves Jin in her flashsideways, right?
Jen: I don’t think they’re married in the flash sideways. Didn’t Sun face down Widmore before?
Nikki: Oh yes that’s right. During her bad-ass era.
Ms Terri: I wonder which Kwon is the candidate. Maybe in some way, it will be both of them together. Because Jacob touched both of them at the same time.

Nikki: Switching course a bit: We learned more about Jacob’s touch. We learned it grants eternal life, but…what else?
Jen: Eternal youth in case of Richard.
Nikki: But why?
Ms Terri: Jacob’s touch seems to set off a whole bunch of rules.
Jen: Right, you get the youth and life, but you have to pay a cost too. Vampires, zombies are both immortal, but not happy.
Nikki: As demonstrated by Twilight.
Jen: Which Hurley so nicely brought up last night.
Ms Terri: That was so funny, when Hurley asked Richard if he was a cyborg.
Jen: And was hoping he’d say yes!
Jen: I do heart Hurley.
Nikki: Cheese curds!
Laurin: Really? Hurley gets on my last nerve.
Nikki: I think he’s necessary to lighten the mood and serve as the voice of the audience.
Laurin: I think I’ve heard enough ‘dudes’ to last a lifetime.

Jen: So what is MIB really trying to do? Is he really trying to get off the island? Via submarine?
Ms Terri: The MIB seems sincere about wanting to get off.
Nikki: And is Widmore Team Jacob or MIB? I think MIB but many think Jacob.
Ms Terri: Don’t know if he was planning on getting a ride in Widmore’s sub, though.
Nikki: If they’re comrades it would make sense.
Ms Terri: It seems like Widmore would be on Team MIB, because both Widmore and MIB appear to be on the evil side. But this show likes to throw curveballs at us.
Jen: Interesting that Widmore comes by sub and in an alt timeline, island is sunk.
Nikki: True. Also Widmore said “If Locke doesn’t get back to the island the wrong side will win.” As if he knew MIB needed Locke’s body to fulfill his mission.
Ms Terri: Speaking of Locke’s body, the thing about people not being able to kill themselves might explain why Ben cut Locke down from the noose, and then killed him anyway.
Nikki: Didn’t think about that. So Locke already couldn’t kill himself, because he had been touched?
Ms Terri: If Ben knew about all that. Which he might not have, because Jacob never told him anything.
Nikki: Poor Ben!

Nikki: Other interesting revelation: Ben and his dad went to Dharma Initiative.
Ms Terri: That was a great moment!
Nikki: That hurt my head.
Laurin: Yes.
Nikki: One theory I’ve heard is that the divergence of timelines happened when Ben’s mom was hit by the car and went into early labor…and Widmore was behind the wheel. Because it doesn’t make sense that they diverged in ’77 if they went to the island? Or does it?
Jen: So the island did exist above water in the other timeline, at least in the 70s.
Nikki: Ouch.
Laurin: My head just exploded.
Ms Terri: Yeah, the sunken island makes my brain hurt.

Nikki: I liked how Ben gave his dad oxygen from the tank…the reverse of him gassing his dad. Cool touch.
Ms Terri: I was worried when Ben was fiddling with the oxygen.
Laurin: Me too.I can never trust Ben. He has forever scared me.
Jen: I don’t know, I’m all confused and honestly starting to get annoyed at this season.
Laurin: I have to agree, Jen.
Jen: I want answers, explicit ones, not just “Jacob touched me.”
Laurin: I feel like I end up with more questions than answers.
Ms Terri: I think they’re saving the answers till the very end. To keep up the suspense.
Nikki: I’m going to start worrying in about three episodes, if things don’t start coming together. But they’re pretty good at barreling through answers in the final acts of the season. Apparently last night was the first episode of the second act, and I think it won’t be until the third act that we really get answers. Alas.
Ms Terri: Yes, exactly. This is the start of Act II.
Laurin: I heard that the writers aren’t going to answer everything, that they don’t know themselves exactly how to tie up everything and likely won’t.
Jen: I hear episode 9 and 15 have huge revelations.
Nikki: How far are we from episode 9?
Ms Terri: Last night was episode 7.
Laurin: It was? Damn, flying by.
Ms Terri: I don’t mind not getting answers.
Jen: Maybe they’re trying a zen exercise with viewers. Answers aren’t important, questions are.

Laurin: I gotta be honest ladies, I’m gonna need some more Sawyer in my life.
Jen: Yes, sans shirt s’il vous plait.
Nikki: YES where is Sawyer?
Laurin: he better be in the next episode or mama’s gonna get angry!
Ms Terri: I’m so intrigued by the sideways timeline, and the way the sideways timeline and island timeline leak into each other. Love that!
Nikki: Me too, I’m a sideways fan, though many aren’t. They give the episodes emotional weight, more like Season 1.
Jen: Yes, that’s true.

Nikki: Ok, about time to wrap up. Fave part of the episode?
Ms Terri: Fave part was Ben’s speech to Ilana and the scene in the principal’s office when we find out that Ben did the right thing by Alex after all.
Nikki: Mine is Ben/Ilana scene too! When she says “I’ll take you”…sniff Then watching him stand outside the group as the Losties reunited and hugged. The eternal outsider. Sniff sniff.
Ms Terri: Yeah, that was sad. Poor Ben. (Never would have thought, in Season 2, that I would ever say “poor Ben.”)
Jen: My fave: Miles taking the diamonds off of Nikki and Paolo’s bodies. He’ll always end up okay, as will Ben. Darwinism, baby.
Laurin: I actually loved when Jack finally trusted and stayed with “guyliner” until the fuse expired. He seemed free.
Nikki: That was a very cool scene too.
Ms Terri: Yes, Jack stepped up to his destiny in that scene.
Nikki: When Jack has a purpose, he’s fierce. I love it. Much better than mopey Jack.
Laurin: I hate mopey Jack.
Ms Terri: Me too.
Nikki: Wahhh I’m a surgeon with daddy issues. Boo hoo.
Jen: Um, yeah. Major daddy issues, like everyone else. Which Lost creator was neglected as a child? It’s called therapy, people.
Nikki: Haha. On that note, off to therapy to deal with my daddy issues. Thanks for joining, Ms Terri!
Ms Terri: Thank you! It was fun.