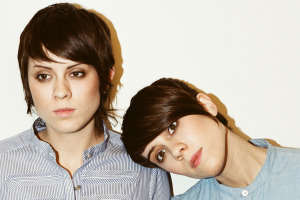 I first met indie darlings Tegan and Sara in a dressing room. The Canadian identical twins, who first burst onto the music scene as teens, have risen to alt fame over the last decade with rock-pop hits like “Walking With A Ghost” (later covered by the White Stripes) and “Where Does The Good Go” (recently featured on the Grey’s Anatomy soundtrack).

We all sat down for a backstage interview at the Fox Theater in Oakland, California (watch it above!). In the video, they speak candidly about their new album, Sainthood, get fired up over the controversy surrounding Lilith Fair (where they’ll be performing this summer), and explain their love for an Adam Lambert single. In person, Tegan and Sara are down-to-earth, thoughtful, and unfailingly polite (even apologizing repeatedly for being less than 10 minutes late).

So it was somewhat surreal to see them take the stage that night as bona fide stars, rocking a full house of rowdy fans who sang along, cheered, and threw various items of clothing onstage. In performance mode, the duo delivered a nearly two-hour set that was punchy, spunky, and full of energy—spanning both new material and old hits like “Back In Your Head” and “So Jealous.” Their impressive musicianship was also on full display; both play guitar and keys, and their self-penned songs are harmony-laden blasts of pop tunefulness.

The Tegan and Sara I met earlier were evident, too, despite the glaring lights and screaming crowds. Their stage banter was casual and accessible, and at the end of the show, they walked to the edge of the stage and humbly applauded their audience. That may be the pair’s greatest charm: They’re cool, but not so cool that you think you couldn’t one day hit up a bar with them—or if you’re lucky, have a chat in a dressing room.