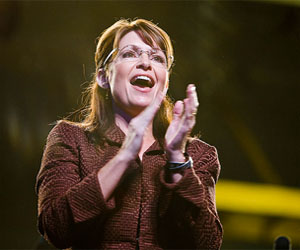 It feels as if Sarah Palin’s been attacking Fox’s “Family Guy” longer than she was governor of Alaska. Last night, a desperate-for-ratings Jay Leno gave her another forum to vent about a single line in a February episode of the comedy show. (One of the characters, a learning disabled woman, refers to her mother as “the former governor of Alaska.” Palin took that as a dig against her son, Trig, who has Down Syndrome, and happily played the victim via a note on her Facebook account.)

Given the golden opportunity, Palin flat-out lied to Leno:

Before Mr. Leno went to a commercial break, Ms. Palin said that a fuller opportunity to discuss the incident would have led to a “much healthier dialogue.” After the commercial, she did not expand on her remarks. (H/T to the New York Times via The Daily Dish.)

Funny, since we all seem to remember her 6-minute tirade on Fox’s “O’Reilly Factor” last month, when she went on at length about the “Family Guy” fake controversy, then parsed Rahm Emanuel’s and Rush Limbaugh’s uses of the word “retard.” She also took the chance to rail against “the Hollywood Fox,” apparently to differentiate it from the more-authentically American Wasilla Fox studio.

(Watch the full video; my favorite part is when Bill O’Reilly, taking up Palin’s cause, rails against “Family Guy” creator Seth MacFarlane with an epic statement that lacks any hint of irony: “This guy Macfarlane, this is a hater. Makes a lot of money for Fox, but I think there should be some standards sometime. But apparently there aren’t.”)

We here at MoJo have written in the past on this “controversy,” including Palin’s unwitting insult to the learning disabled actress who portrayed the “Family Guy” character. We’ve also spilled plenty of ink on Palin’s continued self-branding as a victim—of the media, of liberals ad absurdum—and we hope not to have to say much more. Her “female politician as sacrificial lamb” trope is tripe, meant to give her credibility with voters of a certain age and gender as a suffering woman in an unjust man’s world. It’s served up for mass consumption with all the sloppy cynicism of a Wal-Mart line of cheap dresses. As others have written far more eloquently, Palin stands at the vanguard of a new column of conservative women enjoying the hard-earned fruits of previous generations of feminists—while trivializing the real struggles faced by American women who don’t pull down 7-figure book advances or command 6-figure speaking fees. Enough, please, Ms. Palin: For the good of Americans, women, mothers, and learning disabled children anywhere.