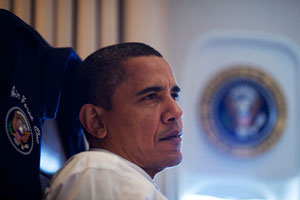 Last week, President Barack Obama gave a speech in New York and decried Republican lawmakers for making false accusations about the Wall Street reform pending in the Senate and denounced the “battalions of financial industry lobbyists descending on Capitol Hill” to weaken or kill the bill. But, as I noted, Obama “named no names. He did what too many politicians often do when they describe how special interests game Washington; he stayed vague.” In pushing back against Republicans and Wall Streeters, Obama doesn’t make it personal. He doesn’t call out any particular foe of reform. Such reticence limits whatever populist energy he might be able to generate by fighting for financial regulation reform. And on Monday afternoon, when I gave White House press secretary Robert Gibbs an opportunity to take a populist stab at the Republicans, he declined.

As negotiations regarding the reform bill were underway on the Hill and the Senate was preparing to hold a vote to avoid a filibuster, Gibbs was fielding questions from White House reporters. He fiercely championed the bill and repeatedly noted that if the Senate Republicans blocked it, they would be voting for preserving the status quo. Defending this point about the GOPers, Gibbs got into a sharp exchange with CBS News’ Chip Reid, who argued that Gibbs was mischaracterizing the Republican position, claiming that the Republicans wanted a “compromise,” not no reform at all. Gibbs, though, would not yield.

When it was my turn to ask a question, I took the opposite tack of Chip Reid. Noting that Obama last week had railed against scheming Wall Street lobbyists and truth-mugging Republicans, I asked if it is the White House view that the Republicans are in league with Wall Street to block reform. Kind of a softball, eh? But I was wondering whether Gibbs would be prepared to say the obvious.

He did not swing at the pitch. Instead, he stuck to press-sec-speak: “I think you know where the president stands on moving forward with this legislation.” If anyone is blocking the measure, he added, “the president believes you’re not acting in the public’s interest.”

There was no tough rhetoric about the Republicans being the handmaidens of Wall Street and working with Big Finance titans to screw American families. Gibbs kept it cool. Was this a sign that the White House believes it’s close to winning the tussle over the bill—by picking up a few Republicans—and does not want to antagonize its possible partners on the other side of the aisle with fiery words? Perhaps. But if the bill does stall because of Republican obstructionism, will the White House remain so polite?

UPDATE: After all Republican senators and Democrat Sen. Ben Nelson of Nebraska voted on Monday afternoon to prevent a vote on the reform bill, Obama issued this statement:

I am deeply disappointed that Senate Republicans voted in a block against allowing a public debate on Wall Street reform to begin.  Some of these Senators may believe that this obstruction is a good political strategy, and others may see delay as an opportunity to take this debate behind closed doors, where financial industry lobbyists can water down reform or kill it altogether. But the American people can’t afford that. A lack of consumer protections and a lack of accountability on Wall Street nearly brought our economy to its knees, and helped cause the pain that has left millions of Americans without jobs and without homes. The reform that both parties have been working on for a year would prevent a crisis like this from happening again, and I urge the Senate to get back to work and put the interests of the country ahead of party.

A populist thunderclap? Harry Truman might have turned up the heat a bit more.