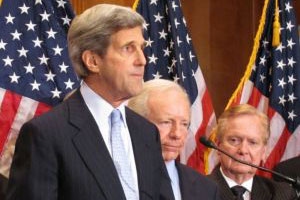 After six months of grueling negotiations, John Kerry (D-Mass.) and Joe Lieberman (I-Conn.) on Wednesday unveiled a 987-page draft of climate and energy legislation that they believe can win the support of 60 senators. “We are closer than we’ve ever been to a breakthrough,” said Kerry at the bill’s release. Notably absent, however, was their onetime Republican co-author, Lindsey Graham (SC), who walked away from the effort amid partisan wrangling over the legislative calendar. So, after all the delays and setbacks and suspense, what’s in the bill?

The draft is a complex attempt to balance competing demands. In a nod to environmentalists, it imposes some new restrictions on offshore drilling. And it retains the same key targets included in the House bill that passed last June: a 17 percent reduction of carbon emissions by 2020 and an 83 percent reduction by 2050. But in a move to please polluters, it establishes a slower phase-in of carbon regulations for many of the country’s biggest emitters. Utilities will be subject to carbon restrictions beginning in 2013, followed by manufacturers and other heavy emitters starting in 2016. The legislation also lavishes major financial incentives on coal, natural gas, and nuclear power.

Other key provisions, many demanded by industrial-state or moderate Democrats, include:

Kerry and Lieberman attempted to quell some of the outrage over offshore drilling by allowing states to opt out of lease sales off their coasts and veto drilling in neighboring states if it’s determined that a spill could harm their environment or economy. But the draft measure also includes revenue-sharing for states that allow drilling off their shores—which opponents believe provides an incentive for states to greenlight more drilling.

Industry groups who joined the senators at the roll-out included the Edison Electric Institute (the trade group representing utilities), Duke Energy, Dow Corning, Honeywell, Florida Power and Light, and the Nuclear Energy Institute. Environmental groups included the National Wildlife Federation, the Environmental Defense Fund, and Republicans for Environmental Protection. Military leaders and a representative from the National Association of Evangelicals were also on hand.

More on the bill to come shortly.