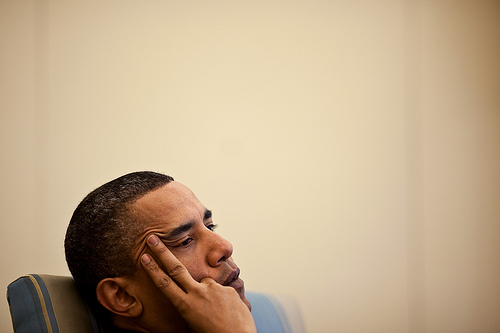 In his weekly address Saturday, President Obama announced the formation of “National Commission on the BP Deepwater Horizon Oil Spill and Offshore Drilling.” This new panel is “tasked with providing recommendations on how we can prevent–and mitigate the impact of–any future spills that result from offshore drilling.”

It’s about time Obama showed some actual anger about the spill and put some thrust behind calls to improve regulation and enforcement in offshore drilling. But Obama yet again missed an opportunity to talk about how the spill illustrates the need to end reliance on fossil fuels. Instead, he gave passing acknowledgment to clean energy, while maintaining that we need to drill for oil here in the US:

One of the reasons I ran for President was to put America on the path to energy independence, and I have not wavered from that commitment. To achieve that goal, we must pursue clean energy and energy efficiency, and we’ve taken significant steps to do so. And we must also pursue domestic sources of oil and gas. Because it represents 30 percent of our oil production, the Gulf of Mexico can play an important part in securing our energy future. But we can only pursue offshore oil drilling if we have assurances that a disaster like the BP oil spill will not happen again. This Commission will, I hope, help provide those assurances so we can continue to seek a secure energy future for the United States of America.

This would have been a perfect point to restate the need for Congress to pass a climate and energy bill this year. But Obama did not.

Obama’s senior adviser David Axelrod took a stab at it on MSNBC this morning, but was also less than convincing. “I would like to think that this will increase the sense of urgency in Congress, because it underscores the value in developing alternative sources of energy,” he said. “So I hope that it will give added impetus to Congress to come up with and pass a comprehensive plan.”

There will never be a better illustration of why our energy system is dirty and dangerous than the current disaster in the Gulf. But Congress needs Obama to step up and lead to prevent this opportunity from going to waste. So far, he hasn’t.