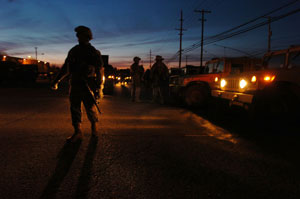 Michael Clauer is a captain in the Army Reserve who commanded over 100 soldiers in Iraq. But while he was fighting for his country, a different kind of battle was brewing on the home front. Last September, Michael returned to Frisco, Texas, to find that his homeowners’ association had foreclosed on his $300,000 house—and sold it for $3,500. This story illustrates the type of legal quagmire that can get out of hand while soldiers are serving abroad and their families are dealing with the stress of their deployment. And fixing the mess isn’t easy.

Michael went on active duty in February 2008 and was sent to Iraq. After he shipped out, his wife May slipped into a deep depression, according to court documents. “A lot of people say that the deployment is more stressful on the spouse than the actual person who’s being deployed,” Michael, 37, says in an interview with Mother Jones. May Clauer had two kids to take care of—a ten-year-old and a one-year-old with a serious seizure-related disorder. In addition, she was worried sick about her husband. Michael’s company was doing convoy security in Iraq—an extremely dangerous job. “It was a pretty tough year for the whole company,” he says. “We had IEDs, rocket attacks and mortar attacks, and a few soldiers that were hurt pretty bad and had to be airlifted back to the States.”

Seeking to avoid hearing about the situation in Iraq, May stopped watching the news. She rarely answered the door, and Michael says he couldn’t tell her when he went “outside the wire”—off-base. May also stopped opening the mail. “I guess she was scared that she would hear bad news,” says Michael. That was why she missed multiple notices from the Heritage Lakes Homeowners Association informing her that the family owed $800 in dues—and then subsequent notices stating that the HOA was preparing to foreclose on the debt and seize the home.

In Texas, homeowners’ associations can foreclose on homes without a court order, no matter the size of the debt. In May 2008, the HOA sold the Clauers’ home for a pittance—$3,500—although its appraisal value was $300,000, according to court documents. The buyer then resold the house to a third person. (Select Management Co., the company that manages Heritage Lakes, declined to comment for this story.)

It wasn’t until June 2009 that May realized what had happened. Around that time, the new owner started demanding rent from the Clauers. She told Michael, who was still in Iraq. “At first I didn’t believe it,” he says. “I didn’t understand how someone can take your house and not give you anything for it.” When Texas Gov. Rick Perry visited Iraq in July, Michael says he told him about the problem. According to Michael, Perry called May and put lawyers in touch with the Clauers’ attorney, but couldn’t do much to alleviate the situation. (Perry’s office didn’t respond to calls seeking comment.) In August 2009, the new owner sent the couple an eviction notice, according to court records filed in the case. In Iraq, “the stress level was finally starting to come down,” says Michael, and he was “starting to see the light at the end of the tunnel.” He adds, “Then all of a sudden I get hit with this, and I’m trying to get out of there and get home and see what I can do to fight this.”

At no point did anyone from the HOA—which is, after all, composed of the Clauers’ neighbors—appear to have tried to visit May Clauer’s house to talk to her about the problem. “The HOA board members…don’t live very far from me at all,” Michael Clauer says. There were “neighbors owing much more than us [who] were notified in person of pending foreclosures, but my wife only received a few letters.” David Schechter of the Dallas/Fort Worth television station WFAA, which first reported this story, notes that the “Clauers’ HOA says homeowners are free to call them, but they do not call or visit homeowners when there’s a problem. They’re only required to send a certified letter.”

There are a bevy of laws that are supposed to protect servicemembers from losing their homes or jobs while they’re on active duty, including the Servicemembers Civil Relief Act (SCRA). The homeowners’ association’s lawyer filed an affidavit wrongly claiming that neither of the Clauers was on active duty, says Barbara Hale, the couple’s lawyer. Hale is seeking to have the court reverse the foreclosure and declare it “null and void,” she says.

In the meantime, the Clauers have obtained an agreement allowing the family to stay in the home, Hale says. She’s “confident that the courts will sort this out and do the right thing,” but notes that the drawn-out legal process must be stressful for the Clauers.

The one good thing for the Clauers about Michael’s deployment to Iraq was that it gave them a chance to get their finances in order. Michael got a bonus and expenses at home were lower. Now all of that money is gone, says Michael, who is currently working as a production supervisor at a roofing company. “It’s ridiculous how much this is costing us,” he says. “I’ll be taking out a mortgage on my house that was free and clear just to try to get my house back.”

Lauren Bean, a spokeswoman for Clauers’ congressman, GOP Rep. Michael Burgess, says that Burgess is “aware of Capt. Clauer’s issue,” but says it is “office policy to not comment on constituent casework.”

Even if he can’t get his family’s home back, Michael hopes that the public will pay attention to his story and push for changes to the laws that give Texas HOAs so much power. “We don’t want to see this happen to other people,” he says.

UPDATE: Several people have emailed asking how they can help. The Clauers have set up a legal defense fund to help pay for their court battle. You can send checks (made out to Clauer Legal Defense Fund) here:

Michael Clauer’s wife’s name is May, not Mae, as this story and other news reports originally stated. Clauer got back from Iraq in September, not October (his active duty period ended in October.) This story has been corrected to reflect those changes. The story has also been edited since it was originally posted.