While, uh, drilling for angles on the BP spill, I stumbled across the following ad in PetroMin, an oil industry trade magazine. 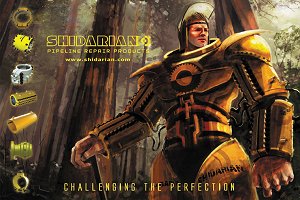 This seemed somehow fitting. Just yesterday the Obama administration—desperate to cap the pipe spewing oil into the Gulf at a rate of up to 798,000 gallons per day—met with Avatar director James Cameron, whose Titanic experience made him an expert on doing stuff underwater. Shadarian, an Iranian company that makes pipeline-repair products, apparently preferred a more Avatar-esque theme. The weirdest thing, though, is the slogan: “Challenging The Perfection.”

Now what the hell is that supposed to mean?

BP, for its part, has challenged the perfection that was offshore drilling’s near-term prospects. Said prospects are exactly what PetroMin associate editor Vishnu Pillai gushes about in the trade rag’s April-June issue, which clearly hit the presses before “blowout preventer” became a household phrase. He writes:

The search for oil and gas has, over many decades, moved from great plains of land to coastal areas and now even into deepwater areas. Yet the industry still believes that there will be no crisis in the foreseeable future. The industry faces the challenges of environmentalists who claim that the planet is being pillaged to assuage the greed of oil companies on a constant basis, faces the challenge of finding new sources of hydrocarbons and faces the challenge of being economically and operationally viable at the same time. Despite such pressing challenges there is that undeflatable air of optimism that is proudly hung across the industry like badge of defiance.

Pillai then explains why the optimism is warranted:

At the early stages of oil production nobody would have envisioned that E&P [exploration and production] would move into the offshore sector. 25 years ago suggestions that E&P would be successful in waters 4,000 feet deep would have been met with incredulity. Yet that is now reality. In fact deepwater E&P is currently considered to be the big thing in the oil & gas industry. Even now predictions of future oil and gas innovations are met with disbelief and mirth. Well, we do live on a planet that mocked Galileo for claiming that the earth was round.

Suffice it to say, BP’s world has gotten a little flatter lately (even if its stock chart hasn’t):

BP and Transocean, Villains Number One and Two in this tragedy, were down 15% and 12%, respectively on Tuesday. The anecdotes are fun if you like stock market trivia. BP’s plunge was the worst one-day drop for its U.S.-listed shares in 30 years and the worst one-day decline for the London-listed shares in 18 years. BP has lost $70 billion in market value since April 20. McDonald’s (MCD) has a market cap of roughly $70 billion. According to the CIA World Factbook, $70 billion was Iraq’s GDP in 2009.

This was all to be expected: BP, for one, has taken heat for giving lowball estimates of spill volume, for attacking the oil with toxic chemicals, for putting Gulf Coast beaches on lockdown, barring photos of dead wildlife, and cutting corners on prespill safety. For making Bobby Jindal look good. And hey, let’s not forget destroying a way of life for thousands of coast-dwellers. Rep. Bart Stupak, who chaired the recent BP oversight hearings, called the company a “culture of incompetence.”

And then there’s the hurricane thing. Offshore magazine, another trade, reported today that the Coast Guard has two big worries on its mind. The first, obviously, is capping that damn pipe. And the second…

“As we move into hurricane season, we are going to be producing oil and of this well…because that is the way we are going to relieve the pressure,” [incident commander Admiral Thad] Allen said. “That means we are going to have to have a way to consider heavy weather, hurricane weather, and what to do about that.”

Yes, just when you can’t imagine things getting any worse—reminds me of Iraq—along comes the prospect of cleaning up this mess amid a hurricane season that is predicted to be a doozy. I found this interactive widget that allows you to lay tropical storm paths over the current oil slick. It seems we can expect to see some scenarios like the following (slick outlined in purple): 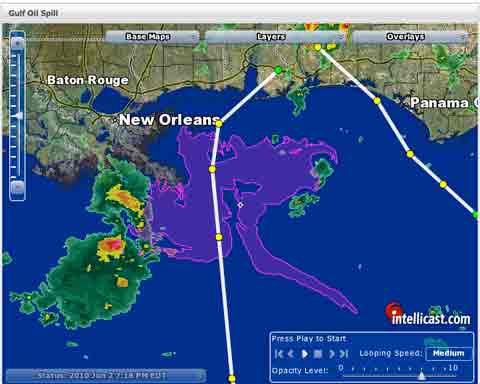 Intellicast overlay of slick with past tropical storm path

Which begs the question: Can’t BP get anything right?

No, really. That’s the conclusion of Patrick Kerley on the Bulletproof Blog. The blog is hosted by Levick Strategic Communications, a firm that views itself as the nation’s top practitioner of the dark art of the crisis communications. (“Dark art” being my embellishment.) Kerley writes that BP’s damage-control website has “secured a place as a prime example of best practices in online disaster communications.”

[O]ne look at the multimedia content available on the site demonstrates an understanding that controlling the images is critical to successful crisis management. The site incorporates a range of visuals, including slideshows of clean-up efforts, diagrams of the spill containment attempts, videos of prevention efforts elsewhere, live streams of press conferences, and links to more images provided by government sites. Notably, the site does not try to hide the damage; instead, it transparently intersperses photos of affected wildlife and oily water with photos of active clean-up efforts.

Second, it’s clear that the inclusion of social media on the Deepwater Horizon Response site is not a last-minute add-on; but rather an integral element. In addition to prominent links to related profiles on major social networks, the home page alone incorporates a Flickr slideshow, embedded YouTube video, and a snapshot of current activity on Facebook. Such dedicated integration encourages active participation among visitors. As such, it’s no coincidence that the Facebook page has 22,000 fans and the YouTube videos have been viewed a total of 1.75 million times—meaning that the Deepwater Horizon Unified Command is sending its message directly to its audience, rather than relying exclusively on reporters and the media filter.

As part of that media filter, I couldn’t help noticing that Kerley, whose title is senior digital strategist, has only 139 Twitter followers.

But I also checked out BP’s disaster-response Facebook page. And it’s clear that most of these “fans” are not, in fact, fans. They clicked so that they could vent their anger on the comments wall. And the company allows this. One June 2 example:

Merita Debbie Marble Blanchet Ahh .what a beautiful day in Pensacola it
is….Just walked outside, took a nice long deep breath ahh and SMELL
OIL!!!!!!!! ! I’m 5 mi inland Not sure if the rain placed the odor there or if
it is in the clouds but it is there. Son was here and he said yup dats
what it smells like and he should know. Wouldn’t eve…n be able to sell a
home around here to move to a lake somewhere. We are screwed
Even more of the Gulf is closed today. Ya hear that BP? Tackle stores are going
out of business…Fish markets are going out of business…The tourist
industry that many depend on are going to suffer ….The housing market
here, that was already bad is becoming impossible…No one around here
wants to buy your boat or your home…if ya need to sell it..How do ya
compensate all of us for the air we have to breath??? If I want to move
from where I was born 61 years ago who will buy my home????

From a crisis-communications perspective, I think Kerley is right. Giving the people you have harmed a public forum (that you control) is actually a pretty savvy (and cynical) way to contain the damage to your reputation. If only the company were half as effective in containing the damage that really matters.