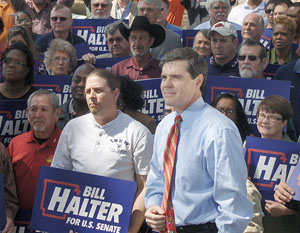 After the Supreme Court handed down its now-infamous Citizens United decision in January, many legal and political observers warned the ruling would unleash a torrent of corporate cash into American elections. President Barack Obama decried the decision as “a major victory for big oil, Wall Street banks, health insurance companies and the other powerful interests that marshal their power every day in Washington to drown out the voices of everyday Americans.” Just as predicted, campaign ads that would previously have been illegal are now airing in key midterm election races. But the players funding those ads aren’t the ones you might expect. It turns out that some of the first groups to exploit Citizens United aren’t corporations, but labor unions.

In recent weeks, the American Federation of State, County, and Municipal Employees (AFSCME) and the AFL-CIO have begun to use the new Citizens United rules to promote their preferred candidates in closely fought contests, such as Lt. Gov. Bill Halter’s challenge to Sen. Blanche Lincoln in Arkansas’ Democratic Senate primary, and the special election in Pennsylvania’s 12th congressional district, which Democrat Mark Critz won in mid-May. In a television ad that started airing late last month, AFSCME whacked Lincoln for moving her family permanently to Washington and taking money from corporate interests. “Blanche Lincoln packed up and left us years ago. Maybe it’s time for us to send her packing, for good,” the ad concludes.

This ad is an example of “express advocacy”—defined as explicitly telling the public to vote for or against a specific candidate. Before the Citizens United ruling, corporations, unions, and other independent groups could only run express advocacy ads if they were funded by political action committees, which are restricted to $5,000 donations each year from individuals—a category known as “hard money.” Now, those groups can use any funds for these campaign efforts—an unrestricted category called “soft money.” Because these groups typically have far more soft money than hard money on hand, this significantly increases their potential budget for advertising that directly attacks or supports a candidate.

“You couldn’t say a lot of things before that you can now, with different money,” says AFSCME deputy political director Ricky Feller, who confirmed that the union used soft money to fund the TV ad. Campaign finance experts say the AFSCME ad is a good example of what’s possible in a post-Citizens United world. Kenneth Gross, a campaign finance lawyer at Skadden, says the new rules could help unions and other groups “have their voices heard, will have an impact on the process and will have an impact on the candidates.”

AFSCME also ran a slew of radio ads in Arkansas made possible by Citizens United. Funded by soft money, the ads urged voters to “say no to Blanche Lincoln,” “vote no on Blanche Lincoln,” and “vote for Bill Halter,” as well as another TV ad that suggested that “it’s time for Arkansas to let [Lincoln] go.” The decision also allowed AFSCME and the AFL-CIO to run express advocacy ads in Pennsylvania’s special election last month, in which unions played a major role in Critz’s victory. Similarly, the AFL-CIO told voters to “cast a vote for Pennsylvania jobs—Mark Critz for Congress” in a radio spot funded by soft money contributions. “We participated heavily in that election and we’re proud of the results we got,” says AFL-CIO spokeswoman Amaya Tune. “We think that ad, and others that we got, were extremely helpful in pushing Critz over.”

Independent groups had previously been allowed to run issue-based ads using unrestricted funds. But they were required to tie those ads to a piece of legislation or other concrete proposal, urging voters to “call Congress” rather than vote for or against a particular candidate. “The ‘call Congress ads’ were somewhat confusing,” says Evan Tracey, president of the non-partisan Campaign Media Analysis Group (CMAG), which researches political ad expenditures. “When you can draw a clear point, a call to action, it’s obviously a much cleaner message in a campaign setting.” The ability to use unlimited funds for such advertising may have already amplified the unions’ voice during a tough election year for Democrats.

So far, it’s difficult to tell the extent to which corporations are taking advantage of the Citizens United decision. The Center for Responsive Politics, a campaign finance watchdog, has found what it calls “the first corporate-funded independent advertisement” post-Citizens United, where a real-estate company called KDR Development ran a print advertisement against the Democratic incumbent in a Texas state House race. But the consensus among campaign finance experts is that corporations will funnel most of their money through trade associations and other third-party groups, rather than directly associating themselves or their brands with election ads. While the Chamber of Commerce vowed to take advantage of the Citizens United decision, it’s not required to disclose its donors, and campaign finance watchdogs haven’t noticed a significant uptick in express advocacy ads from corporate-backed groups. (The Chamber did not respond to a request for comment.) “At least anecdotally, [the KDR ad] is the exception and not the rule,” says Dave Levinthal, communications director for the Center for Responsive Politics.

Some campaign finance experts argue that the record level of campaign spending by independent groups this year is partly due to the Citizens United decision. The ruling has “a broader impact than just express advocacy ads,” says Marc Elias, a campaign finance lawyer who’s frequently worked with the Democratic Party. “It made it simpler and less risky to run campaign-related ads—it affects the overall environment for spending.” The Chamber says that it plans to spend $50 million on the election this year—twice as much as it did in 2006. According to CMAG, overall spending on political advertising this year, at $62 million, is more than three times the amount spent in the last midterm cycle. Political expenditures overall have topped $2 billion in 2010 so far. And about two-thirds of expected group expenditures will come from conservative-leaning organizations, the Washington Post reports. Labor unions, too, plan to spend record amounts this cycle—AFSCME and the AFL-CIO are devoting at some $100 million combined to their 2010 campaigns—though AFSCME’s Feller says that Citizens United is unrelated to their spending. (Other experts argue that the high political stakes and legislative agenda are driving the sky-high expenditures.)

Obama and congressional Democrats are currently pushing legislation that would create stricter disclosure requirements for political advertising. But even if that happens, labor unions may be able to get a head start on the Citizens United ruling in the meantime compared with corporations, which may be required to clear new campaign spending with their shareholders and boards of directors. Unions “don’t have some of the shareholder issues that corporations have,” says Gross. “They’re perhaps poised to take advantage of the decision.”

Not all unions think that’s a great idea. While the AFL-CIO and AFSCME cheered the Citizens United ruling, the Service Employees International Union (SEIU) unequivocally opposed it, arguing that its benefit to unions is dwarfed by the advantage gained by corporations. “We have no plan on changing things,” says SEIU spokesperson Lori Lodes. “It’s not worth the couple of extra dollars we could spend—it’s not worth it to us to have voters’ voices completely silenced by corporations.”

AFSCME and the AFL-CIO say they share those concerns. “Once corporations figure out how they’re going to do this or not do this, we can’t compete with their money,” says Feller. But they believe that the same rules shouldn’t apply to them. “We think unions are different from corporations,” says AFL-CIO’s Tune. “They actually represent members who pay their dues, representing working people.”