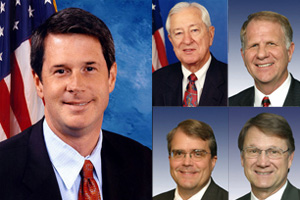 Even as oil continues to pour into the Gulf from BP’s well a mile below the sea, some members of Congress are calling on the Obama administration to end the temporary moratorium on new drilling in the region. The group, which 17 Republicans and one Democrat from Gulf coast states, argues that the BP disaster and offshore drilling should be treated as separate issues entirely.

At a press conference on Tuesday, Ted Poe (R-Texas) said that “jobs will be lost, businesses will move someplace else” if the moratorium continues, and introduced a bill that would lift the administration’s temporary pause on new drilling and exploration. Sen. David Vitter (R-La.) has introduced companion legislation in the Senate.

“This is about the Gulf coast and about America,” said Louisiana’s Charlie Melancon, the lone Democrat at the presser. His district in southern Louisiana has been the most affected by the oil disaster, but is also heavily dependent on income from the oil industry. “We are united in support of responsible offshore drilling … The last thing we need is a moratorium on offshore drilling that would result in thousands of workers laid of.” He said while he understands that the moratorium is “well intentioned,” it “would deliver a body blow to the economy.”

It might seem counter-intuitive that the same representatives from states devastated by the Gulf spill are the ones calling on the government to move ahead full-bore on new drilling. But these are also states heavily dependent on income from the oil industry–16 percent of Louisiana’s GDP is from the oil industry. That said, the current ban only affects new drilling and exploration, despite what the representatives argued. Rigs already in production have not been affected by the moratorium.

If I were a cynic, I might suspect the fact that all these representatives have taken quite a bit of money from the industry had something to do with it as well. Melancon, who broke down in tears at a hearing last month about the disaster, has taken $312,100 from the oil and gas industry in his career, and $65,500 this year alone, according to the Center for Responsive Politics. Poe has raised $44,250 from the oil and gas industry this year and $208,450 over his lifetime. But surely that has nothing to do with it.

The moratorium, said Poe, is based is “based on unfounded science.” He also told reporters that he thinks the current disaster and the future of offshore development should be treated as “separate issues.” And yet, the press conference happened as oil executives were testifying before a House panel about their ability to respond to oil spills. The executives admitted that, should the worst happen again, they can’t deal with it. “The fact of the matter is when these thing happen, we are not well equipped to handle them,” said Rex Tillerson, head of ExxonMobil.

Many of the Republicans used the press conference as an occasion to bash Obama. “This moratorium the president has in place is a job killer,” said Rep. Gregg Harper (R-Miss.). “It will make a horrible disaster even worse.”

“This is a knee-jerk reaction by the administration to address a problem that doesn’t exist,” said Pete Olson (R-Texas). Another Texas Republican, John Culberson, argued that the BP oil disaster “is an anomaly–like an airplane falling from the clear blue sky.”

Others used it as an opportunity to gripe about all the other places we can’t drill, with Ralph Hall (R-Texas) noting the Arctic National Wildlife Refuge and the Florida and California coasts as places he’d also like to see drilling. Others complained that Obama might use the oil spill to encourage Congress to pass cap and trade legislation.

Ridiculous arguments aside, I’ve got to admit, it takes some giant brass balls to stand up and call for more drilling even as your states drown in oil. The members said they are meeting with Secretary of Interior Ken Salazar tomorrow to make their case about why they believe the ban should be lifted.