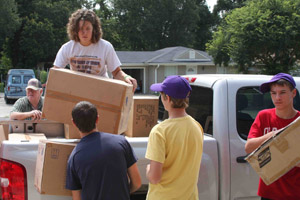 The last time I saw Julie, she was agitated and having trouble taking deep breaths. That was a month ago, at a group therapy session for the wives of fishermen, where they discussed the anxiety, depression, and anger caused by the oil spill and the sudden disruption of their families’ livelihood. That was when I named Julie “Julie” to protect the identity of her husband, who she said had talked about hunting down BP CEOs. But today, she’s mostly pleased as pie.

I’ve caught up with the fishermen’s wives at a day camp they’ve organized at J.F. Gauthier Elementary School in St. Bernard, Louisiana, and there’s hot dogs, barbecue burgers, chips, baseball, water guns, and a bouncy-castle waterslide. Earlier this month, Julie and Brenda, another woman I met at the therapy session, organized three days of entertainment for about 60 local kids with the help of the St. Bernard Project, a community organization founded in the wake of Katrina. Julie surveys the kids running around and squealing in bathing suits with her hands on her hips. “We wanted to give them something to do, something fun. Normally, they’d be fishing with their dads. Fishing, swimming in the bayou, aggravating dad on the boat.” All the food and entertainment is donated, the product of endless phone calls and solicitations. “I haven’t even been thinking about the oil spill these last two weeks. I’ve just been trying to get something to do for the kids.” 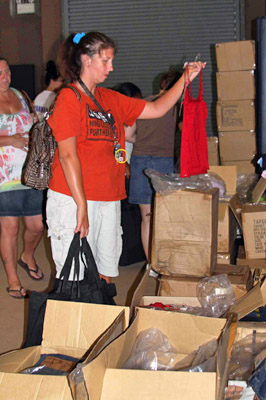 The donations go well beyond picnic fare. Inside the school gym, big cardboard boxes are piled along the walls. Earlier this morning, pickup trucks pulled up and volunteers helped unload a miscellany of hastily assembled aid: Many bottles of water. Huge stacks of Levis in a several sizes. Bratz-branded tennis shoes, kids’ slippers with Shrek on them. Kitchen disinfectant. About a million Band-Aids. Women walk the perimeter carrying Mastercard tote bags someone dropped off, filling them with anything they can use. None of the Levis are in Julie’s size. Someone else complains that the tennis shoes are only for girls and the baby shoes are only for boys.

“We really need diapers and school supplies,” Julie tells me. “School’s coming up, and a lot of people are gettin’ worried about buying uniforms.” (Here, all schoolchildren have to wear uniforms.) With BP’s claims checks coming late or in vastly reduced amounts, unemployed fishermen’s families may be low on cash. Catholic Charities has been picking up some of the slack, giving away millions of dollars worth of grocery vouchers and rent assistance, but many people still need basics like toiletries and clothes.

“Also,” Julie says, “we need people who aren’t affected to stop coming and taking the donations from those in need.” She lowers her voice. “Like this gang behind you.”

I’ve already talked to the women she’s referring to as they sorted through free low-quality tank tops; they are indeed not spill victims. And in this still-drowned-out part of town—the houses across the street from the school still bear the National Guard’s post-Katrina spray-paint markings—”need” is sort of a relative term. One of the women looking at tank tops recently moved out of a FEMA trailer. She asked me nervously if there were any school uniforms available or if I knew when or where she might be able to get some. But right now, in this gym full of children dragging each other around on empty cardboard boxes, need refers only to people who may still be struggling from the last rash of disasters and have been smacked by Deepwater Horizon.

The wives’ next project, Brenda tells me back outside, is a weekend-long fundraiser. It may involve a car wash with the kids, among other things. They’re still trying to get donations to put on another camp in August, trying to get the kids involved in the planning—”the water balloons we have here were their idea”—trying to find someone to spring for the uniforms. She has no idea what to do about the larger and longer-term issues. “All these kids, by the time they’re in high school, they’re workin’. As soon as they’re of age, they work on a boat. When they’re in high school, they earn enough money to buy cars. By the time they get outta high school, they buy a boat.”

She’s quiet about that for a moment, then waves her hand dismissively. “Anyway, settin’ this up was a lot of time. I been so busy. It just kept my mind off the oil spill. I wanted to do something I knew I could make it happen, and all I wanted was to see happy faces.”