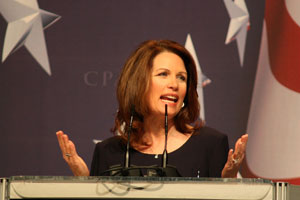 The group, which Bachmann describes as “a listening ear to tea parties,” is now comprised of 24 33 House Republicans. A write-up of the press conference will come shortly (you can now read the full post here), but below is the starting line-up of members to whet your appetite.

Update: FrumForum reports that not all of Republicans listed as members appear to have actually joined the caucus. Staff members for Rep. John Mica (R-Fl.) and Rep. John Fleming (R-La.) said Wednesday afternoon that they didn’t believe their bosses had joined. And the press secretary for other members said they were not aware that the roster would be publicly released today. The list has since been pulled from Bachmann’s website, and the names below are from a list that Bachmann’s press secretary had distributed at a press conference earlier Wednesday morning.