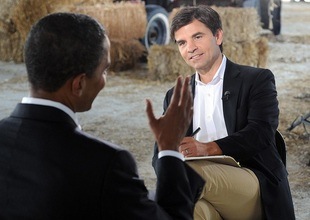 Did Glenn Beck try to snooker George Stephanopoulos? If so, the Good Morning America host didn’t fall for it.

Fox News star and tea party favorite Glenn Beck is planning a huge “Restoring Honor” rally at the Lincoln Memorial on August 28, with special guest Sarah Palin. The event is supposed to be all about “the troops.” As such, Beck has been sponsoring an online auction to benefit the Special Operations Warrior Foundation, which provides scholarships to the children of fallen special operations military personnel. Beck has gotten lots of his famous friends and conservative compatriots to contribute to the auction. Last week, Beck fans surfing the auction site would have found a chance to dine with Newt Gingrich, drive 60 laps with NASCAR racer Rusty Wallace, or have lunch with media phenom Andrew Breitbart. They could even win an introduction to George Stephanopoulos and tickets to see a filming of Good Morning America.

Wait. George Stephanopoulos? The well-known former Clinton administration whiz-kid-turned-TV-host at a Fox network competitor? Hmmm. Somehow Stephanopoulos, going for $750, seemed like the odd man out in this lineup of conservative luminaries and Beck buddies. He also seemed like a curious offering for an auction that isn’t entirely charitable. His online listing came with this disclaimer:

PLEASE NOTE: All contributions made to the Special Operations Warrior Foundation (SOWF), either directly or through the auction proceeds, will first be applied to the costs of the Restoring Honor Rally taking place on August 28, 2010. All contributions in excess of these costs will then be retained by the SOWF.

All that boilerplate means the proceeds from the auction don’t go first to the charity, but to Beck’s tribute to himself on the Mall. The event is estimated to cost $2 million, and SOWF has said that it has already raised at least that much thanks to Beck. Still, the rally is highly controversial.

Civil rights leaders and others have taken grave offense to Beck’s choice of dates for his rally because it just happens to fall on the 47th anniversary of Martin Luther King Jr.’s “I Have a Dream” speech. The move doesn’t seem to be a coincidence; Beck has been comparing himself to the civil rights leader for quite awhile now, promising to “reclaim the civil rights movement.” The man who called the first black president a racist and once called Jesse Jackson the “the stinking king of the race lords,” will prevent African-Americans from honoring the March on Washington anniversary at the Lincoln Memorial. Did Stephanopoulos really agree to help underwrite Beck’s attempt to upstage MLK?

As it turns out, he didn’t. After a call from Mother Jones, ABC News officials started asking questions about where the Beck auction money was going. Shortly afterwards, the Stephanopoulos page disappeared.

Cathie Levine, vice president for media relations at ABC News explained, “We get hundreds of these solicitations from charities every year and try as much as possible to fulfill them as long as they are meet our standards including that the proceeds go to charity.” A few days later, she reported back that, “We sought assurance that the auction money would go directly to charity and while we were told the rally costs were covered and that funds raised from our specific item would go to Special Operations Warrior Foundation, it didn’t sufficiently meet our standards. So we withdrew our auction item and George will make a personal donation directly to the SOWF.”