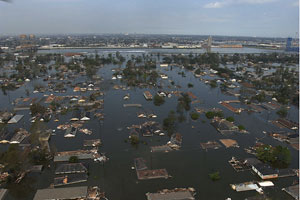 New Orleans, La., August 29, 2005—Aerial of a flooded neighborhood with homes flooded to their eves. In the background is one of the breeched levees with water entering the area. | <a href="http://www.flickr.com/photos/smiteme/221291144/">FEMA image</a>.

At some point during the awful days of Hurricane Katrina, I received an email from my friend Harry Shearer, the actor, satirist, and musician. The national media are getting the story wrong, he angrily declared: What’s happened in New Orleans is not a natural disaster; it’s a catastrophic failure of government. This was a case of profound negligence—poorly designed and shoddily built levees had collapsed. He was anxious to spread the word: Don’t blame the category-five storm. Blame those who constructed the inadequate levees.

Now, on the fifth anniversary of Katrina, Shearer is releasing a feature-length documentary he’s produced, written, and directed—called The Big Uneasy—in which he nails the case: The flooding of New Orleans was due not to Mother Nature but to the US Army Corps of Engineers. For some, Shearer may seem an unlikely investigative documentarian. He’s well-known for starring in movies (he was bass player Derek Smalls in This Is Spinal Tap) and for voicing several characters in The Simpsons, most notably the deliciously nefarious Mr. Burns. For nearly three decades, he has hosted Le Show, a syndicated weekly radio show featuring a satirical hodgepodge tied to the news. He was a Saturday Night Live cast member; he’s written a novel; he’s developed video installations for museums and galleries. But he’s also practiced journalism. Shearer covered the O.J. Simpson trial for Slate. He has been a regular contributor to the Huffington Post, spending a stretch as its top media critic. I first met Shearer at the 1996 GOP convention in San Diego, when we both were trying to sneak into a private fundraising reception chock-full of lobbyists. (We failed.)

Shearer is a part-time New Orleanian. “My wife and I got a place here in the late ’90s,” he says. “This is an incredibly seductive city, it speaks to you in a language all its own, and if you speak that language—even though you may never have heard it before—it’s irresistible. It functioned as a great antidote to Hollywood.” And he did not want to see anyone get off the hook for failing his adopted city.

The Big Uneasy, which will be screened on August 30 in theaters across the nation (check here for a cinema near you), is an indictment of the Army Corps. Shearer tracks independent investigators working for the state of Louisiana who moved quickly after the hurricane to determine what had caused the disastrous flooding that destroyed much of the Crescent City and that claimed the lives of hundreds. Weaving together poignant interviews with these scientific gumshoes, dramatic computer imagery depicting what went wrong with the levees, and gripping footage of the flooding, Shearer tells the story of the most calamitous engineering screw-up in US history.

At the start of the film, Shearer presents a parade of pundits and politicians referring to the tragedy of New Orleans as a “natural disaster.” But he then introduces Ivor van Heerden, who at the time was the deputy director of the Louisiana State University’s hurricane center, and Robert Bea, an engineering professor at UC-Berkeley. The two describe their efforts to examine what had led to the flooding of New Orleans. They don’t mince words, as they explain how the Army Corps of Engineers, which built and maintained New Orleans’ crucial flood-control system, had constructed levees that were structurally unsound and on nonsecure soil. The water surge from the hurricane did not flow over—”overtop,” in engineering parlance—the levees. Instead, it eroded the base of the levee walls—which had not been set deep enough—and the levees collapsed. (Bea demonstrates his method of tasting soil to see if it’s the right spot to place a levee.)

Van Heerden explains that what the engineers discovered undermined the Corps self-exculpating claim that the sheer amount of water was no match for the levees. He notes the surge didn’t reach the top. “It must have been a structural issue, an engineering design issue,” he says. Bea adds that he, van Heerden, and other investigators came across the “kind of mistakes…you learn about in second-year engineering.” (The film also details how the Corps’ construction of the Mississippi River-Gulf Outlet canal, which was completed in the 1960s, helped set the stage for the disastrous flood.)

The Corps has denied it committed such errors. And the investigators were not rewarded for their efforts. Van Heerden says he was ordered by his superiors at LSU not to testify against the Corps. His position at LSU was terminated. (The Big Uneasy also follows the tale of a Corps whistleblower, Maria Garzino, who tried to warn the agency of problems with the water pumps to be used in the levee system after the hurricane.) Bea notes that at one time the investigators were told by the American Society of Civil Engineers that they couldn’t tell the public what they believed had happened: “This is a cover-up.”

The findings of the independent investigators did become public. But watching them recalling their run-ins with the Corps and describing the retribution they faced prompts a double outrage. It was terrible enough that the Corps erred in its design and construction of the levees, but the attempt to deny the truth (and punish those who dug it out) almost seems worse, for without a clear accounting of what happened, such a nightmare could occur again.

“The Corps,” Shearer says, “clearly didn’t enjoy the presence of two independent teams of investigators, and it didn’t make their jobs any easier. It also relentlessly criticized them, and their early findings, publicly. The Corps had its own investigation, which it controlled, and it preferred that people focus on that. The national media thought they ‘had’ the story—big hurricane in Gulf, city below sea level, death and suffering, and they left even before the water did. They never paid attention when those investigators released their reports.”

In the movie, Bea sums up the film’s prime contention: the flooding was “a very unnatural disaster…caused by people.” It was no act of God. But does the natural disaster myth have roots so deep it cannot be undone? “I hope not,” says Shearer, “otherwise I wouldn’t have spent all this time and money making this film. I hope that, after this tremendous re-experiencing of the footage of suffering and disaster, people might well be ready to ask the question, ‘Why’?” Even five years later—and even after the Gulf has been hit by another human-made disaster, the BP oil spill.

As for the multi-faceted Shearer’s next target, he says he’s now collaborating with a British television production company on “a comedy project about Richard Nixon.”

REMEMBERING KATRINA
On the fifth anniversary of the hurricane that ravaged New Orleans (and much of the rest of the Gulf Coast), Shearer isn’t the only journalist seeking to put the disaster in perspective. A round-up of recent examinations: