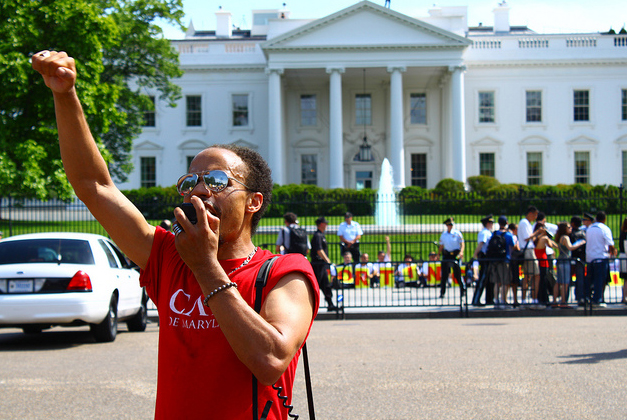 Along with Hispanic voters, Hispanic media leaders have begun to sour on President Obama given their failure to pass a comprehensive immigration overhaul. On the campaign trail, Obama vowed to pass immigration reform—a promise that he has repeated every few months or so. But Congressional gridlock on the issue has fueled frustration within that both Obama and the Democrats aren’t doing enough.

On Wednesday, Politico spoke to Univision’s Jorge Ramos—who’s considered the “Walter Cronkrite of Spanish-language media.” Ramos discussed his disillusionment with Obama and cited his growing “credibility problem right now with Latinos.” Other commentators and editorial boards feel similarly disappointed: La Opinion, the country’s biggest Spanish-language paper, blasted Obama’s big immigration speech last month by titling its editorial “words are not enough.” As it turns out, Hispanic voters’ approval of Obama has been dropping at a faster rate than either white or black voters’—from 69 percent in January to 57 percent in May, according to a recent Gallup poll.

The Obama administration did take a political risk in filing suit against the Arizona law—which the majority of the public supports—successfully blocking the most controversial parts of the measure from taking effect. But the lawsuit has been the exception to the rule: nearly every other major action that Obama and Congressional Democrats have taken on immigration has resulted in ramped up border enforcement and deportation crackdowns that have targeted illegal immigrants. On Tuesday, the House passed a $600 million enforcement bill that included funds for 1,500 border agents, unmanned drones, and “military-style bases along the border.” The Senate passed a similar bill, and Majority Leader Harry Reid plans to re-open the chamber during the August recess to put the final version through. Similarly, the Obama administration has recently expanded a fingerprinting program that would make it easier to target and deport undocumented immigrants who are convicted of non-immigration related crimes.

Pro-immigration advocates have accused the Obama administration of caving to conservative demands to crack down on illegal immigration without getting anything in return. Congressional Republicans still refuse to back broader immigration reform measures. While many who support a comprehensive overhaul have been willing to accept ramped up enforcement measures, they want such measures to be part of a larger package that would also include a path to legalization for illegal immigrants. Instead, immigration supporters and Hispanic voters have witnessed an “enforcement-only” approach to the issue, and there’s been no further progress made on comprehensive reform. Though Obama has faulted Republican obstructionism and a gridlocked Senate for the hold-up, the Latino community seems increasingly unwilling to accept such excuses. And such disappointment will make it all the harder for Democrats to convince Latino supporters to come out to the polls this year.