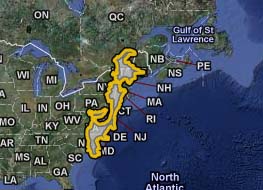 The flood waters in Pakistan continue to rise, affecting 20 million people in an area that would stretch from Maine to North Carolina in the US (see image left). Requests for relief funds have increased on Twitter and Facebook, and yesterday Secretary of State Hillary Clinton made a personal plea to the American people in this video.”Governments cannot be alone in helping the people of Pakistan,” she said. She announced the foundation of the Pakistan Relief Fund, whose site says that “The most effective way people can assist relief efforts is by making cash contributions to humanitarian organizations that are conducting relief operations.”

The appeal to Americans is admirable, and so far the US government has pledged $150 million in aid. But I couldn’t help but wonder why the State Department didn’t emphasize the help that could be given not only by the American people, but by American corporations specifically. Certainly, individual contributions will make a huge difference, but wouldn’t it be even bigger if corporations would match them? US companies that do business in Pakistan, like the members of the Chamber of Commerce-affiliated US-Pakistan Business Council, have indeed made donations to relief funds. For example, Coca-Cola ($500,000), Procter&Gamble ($400,000) and Monsanto ($100,000) have donated, but other members like Boeing (which has a partnership with Pakistan International Airlines, and $15 billion in revenues) and Shell have not. If corporations really are people, as the law sometimes says they are, then maybe they should be more heavily targeted by the Department of State since they have more in their bank accounts than most Americans.

Despite the dozens of corporate donors and the Secretary of State’s personal appeal, there’s been concern that the president’s response to the floods has been lacking. White House press secretary Bill Burton has said that “Our relationship with Pakistan is one that’s more than just about fighting armed extremists,” but he did not directly answer a reporter’s question on whether President Obama would make a televised statement encouraging help for Pakistan as he did for Haiti. So far, the US has given Pakistan the use of 19 helicopters and supplied 181,000 people with a month’s food rations, but the UN reports that only about half of the aid needed has been received. Governments, NGOs, and private citizens around the world have stepped up their efforts, but I personally would love to see more donations from large US companies like Wal-mart that use Pakistan’s low manufacturing costs to boost its own profits, one $20 towel set at a time.