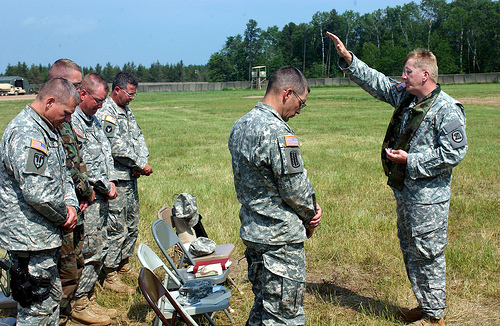 In the military, it’s said, training never ends. Officers at one Virginia base reportedly think that maxim extends to their soldiers’ religious development, as well: The Army is investigating allegations that soldiers there were ordered to attend a Christian pop-rock concert, or else remain confined to their barracks.

“Instead of being released to our personal time, we were locked down,” Private Anthony Smith told the Associated Press, referring to himself and the other 100 or so men who declined to attend the concert. “It seemed very much like a punishment.”

While the AP first reported the incident on August 20, it missed some tasty details about the base general who organized the $23,000 concert—and many more like it. It also didn’t say much about the band involved, an all-teen trio of sisters called BarlowGirl who are kind of a big deal in Christian pop circles.

The May 13 concert was the brainchild of a self-professed “reborn” officer, Maj. General James E. Chambers. While commanding Ft. Eustis in Newport News two years ago, he “promoted a series of concerts, featuring Christian performers, aimed at awakening Soldiers’ spiritual awareness,” according to an Army profile from 2008. When he moved over to Ft. Lee, he continued “that outreach,” the Army said. “The idea is not to be a proponent for any one religion,” he told his profiler back then. “It’s to have a mix of different performers with different religious backgrounds.”

But in fact, no one can recall anything other than an evangelical Christian band playing the so-called “Commanding General’s Spiritual Fitness Concerts” since they were instituted. (When asked for a list of previous concerts held, public affairs officials at Ft. Eustis referred all requests for information to staff at Ft. Lee, who didn’t return calls for a comment.) And a writer at Ft. Eustis’ own base paper, the Peninsula Warrior, didn’t make the recent concert sound terribly nondenominational:

Following the Apostle Paul’s message to the Ephesians in the Bible, Christian rock music’s edgy, all-girl band BarlowGirl brought the armor of God to the warriors and families of Fort Eustis during another installment of the Commanding General’s Spiritual Fitness Concert Series May 13 at Jacobs Theater…

Faces uplifted, arms raised heavenward, and a prayer of their lips, the gathered Soldiers and family members prayed and praised with the band throughout their 90-minute set.

Chambers struck Jesus-pop paydirt when he landed BarlowGirl, whose stormy Tori-Amos-plus-Avril-Lavigne-plus-the-Lord rock-chord ballads have sent them to the top of Billboard’s Christian Chart. (According to the girls’ Wikipedia entry, their 2007 album How Can We Be Silent was the first “by an all-female rock band to reach the top 40 on the Billboard 200 since Everything by the Bangles in 1989.” That claim couldn’t be immediately verified.)

BarlowGirl proved themselves friendly to the military message, too, in a peculiar way. The bandmates’ father, Illinois pastor Vince Barlow, summed up that zeitgeist for the base paper: “We really believe that to be a Christian in today’s world, you have to be a warrior, and we feel very blessed and privileged that God has given us the tool to deliver His message and arm His army.”

“They’re supposed to support and defend the United States Constitution, not the pristine weaponized gospel of Jesus Christ.”

That kind of rhetoric is par for the course, according to Mikey Weinstein (no relation), who heads the Military Religious Freedom Foundation, which first broke news of the concert series. “Ft. Eustis is not an anomaly, just an example,” he says. “‘Spiritual fitness’ is 2010 Christian talk for “We’re gonna make you a Christian.”

Weinstein says his organization has tracked an ever-growing problem of proselytizing in the ranks for a particular, hyper-muscular strain of dominionist end-times Christianity. Of MRFF’s nearly 20,000 clients, 96 percent identify as Christians who feel intimidated by more aggressive co-religionists. “What’s happening is, troops are being told: ‘You’d better be the right type of Christian,” he said.

At least a few of the troops in the Ft. Eustis unit felt they were on the wrong side of the faith. “Why do Christians get to celebrate their religion while we get to clean?” Smith told a reporter from truthout.org. “That’s the fucked up part.” He added that he and eight other soldiers originally went to complain to their equal opportunity officer. Seven were too scared to file a formal complaint, and the EO officer tried to talk Smith and another soldier out of lodging their grievances. That’s when they sought out MRFF.

An Army spokesman at the Pentagon said its investigation would determine if disciplining is warranted. “If something like that were to have happened, it would be contrary to Army policy,” he told the AP when the barracks confinement was described to him. Army officials declined to say how long that inquiry could take.

Weinstein says the officers involved, up to Chambers, should face a court-martial for exacting “an unconstitutional toll on religious objectors.”

“They’re supposed to support and defend the United States Constitution, not the pristine weaponized gospel of Jesus Christ,” he said.