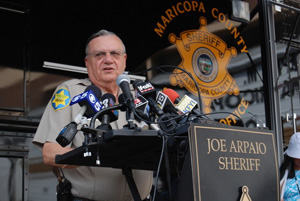 The Department of Justice is suing Sheriff Joe Arpaio for refusing to cooperate with a federal investigation into whether his highly publicized crackdowns on illegal immigrants in Arizona’s Maricopa County violated people’s civil rights. DOJ had threatened the suit last month after accusing Arpaio of failing to turn over documents that could determine whether his immigration sweeps and treatment of Hispanic inmates were discriminatory and overreaching (as I blogged earlier and Aura Bogado explored in detail in her Mother Jones article, “Hazing Arizona.”)

The suit alleges that Arpaio also refused to let federal investigators tour the county jail or other facilities. A federal judge, meanwhile, ruled earlier this year that Arpaio’s department had destroyed documents related to its immigration sweeps. DOJ denounced Arpaio’s crackdowns and accused him of obstructing the federal investigation. From the Los Angeles Times:

The department said it was the first time in 30 years a police agency had not cooperated in a civil-rights probe. “The actions of the sheriff’s office are unprecedented. It is unfortunate that the department was forced to resort to litigation to gain access to public documents and facilities,” said Thomas E. Perez, assistant attorney general for the civil-rights division, in a statement.

Arizona has clearly emerged as a laboratory of sorts for immigration law enforcement, given the calavier approach that some of its officials have taken toward cracking down on illegal immigrants. Both fans and foes of immigration will invariably cast the Arpaio lawsuit as an extension of the federal government’s challenge to SB 1070, the controversial statewide immigration law that was blocked in court earlier this summer.

But the differences are also worth noting: The feds challenged SB 1070 on the grounds that the state law had pre-empted federal authority on immigration law; noticeably absent was the argument that it enabled racial profiling, and thus violated civil rights. (The legal reasoning was that the pre-emption argument would hold up better in court.) But now, with the Arpaio investigation and accompanying lawsuit, the Justice Department is sending the message that it is willing to add civil-rights protections to its priorities for immigration enforcement—and go after authorities who refuse to take heed. With moderate swing-state Democrats running scared in the midterm elections, it’s a risky time for the Obama administration to get aggressive on the issue. But the Justice Department, at least, seems to have put such fears aside, at least until they can manage to rein in the rogue sheriff.