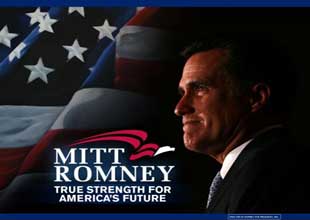 The big story coming out of Friday’s Values Voter Summit—the massive religious-right confab in DC—is the obvious marriage between the burgeoning tea party movement and the old Christian Coalition. The stars of the event were tea party luminaries: Sen. Jim DeMint (R-S.C.), Rep. Mike Pence (R-Ind.), Rep. Michele Bachmann (R-Minn.), and of course, newcomer Christine O’Donnell, who just won the Senate GOP primary in Delaware. But lost amid all the tea party fervor was what may be the beginning of the end of the presidential prospects of former Massachusetts governor Mitt Romney.

Romney was clearly here because he is running for president again. The straw poll at the summit is considered an early bellwether for the GOP primary of 2012. But Romney looked more out of place than ever at the gathering of largely white evangelical voters. Romney has never connected very well with this audience; they aren’t crazy about his Mormonism, and even Glenn Beck doesn’t seem to have changed that. On Friday, he seemed even more of a fish out of water than he did last year, thanks to the fast-moving tsunami of the tea party movement, which has completely changed the political landscape since his last primary bid. For all his attempts at better jokes, Romney just couldn’t get a rise of the crowd. While DeMint earned cries of “DeMint for president!” Romney generated only polite applause. He seemed far more at home at a Rotary Club meeting than among the rowdy Christian footsoldiers.

He tried to find some common ground by telling a story about shopping at Wal-Mart, which fell flat as he digressed into comparisons with Target. His attempts at red meat, which might have seemed edgy two years ago, were too polite for a crowd that just heard Sen. Jim Inhofe (R-Okla.) make a frontal assault on gays in the military. “We have a president whose idea of a rogue state is Arizona,” he riffed, talking about President Obama’s foreign policy and attempts at diplomacy with North Korea. In an environment where tea partiers (the majority of attendees, if a show of hands can be believed) are used to hearing speakers call the president a socialist at best, a traitor at worst, Romney’s criticism of Obama seemed oh-so-tame.

“I think the country is better off when he’s listening to advice from his caddy than his economic advisors,” Romey said of Obama.

Previous speakers had generated a slew of loud, standing ovations for calling for repeal of Obama’s health care bill, which was fresh in everyone’s mind. Romney couldn’t touch that one, given that Obama’s plan was modeled after his own health care plan in Massachusetts. And in the end, as always with him, Romney’s stoic Mormonism hindered his ability to speak in the kind of evangelical Bible code that people like Sarah Palin use so masterfully to whip up similar crowds of voters. The Book of Mormon, not the Bible, is his text, and he’s about as likely to quote from that book as he is from the Koran.

It’s an interesting phenomenon, because on one level, Romney seems like he should be a direct beneficiary of the rise of Glenn Beck, the reigning king of the tea party/Christian Coalition GOP wing—and a Mormon. Beck’s acceptance by evangelical voters as a legitimate political voice should be breaking down prejudices that hindered Romney’s prospects in places like Iowa in the past. But Beck is a convert. He has the passion of a born-again and the emotional rawness of a 12-stepper. He weeps in public.

Romney, by contrast, was born and raised a Mormon. He can take his religion for granted. He doesn’t weep. In effect, he’s nothing like Beck. And at the same time, there’s not much else but his Mormonism to distinguish him from the rest of the pack. This year, he is the generic establishment Republican—and right now, that’s exactly what conservative voters don’t want. Listening to him speak today, it was hard not to think that Romney is a guy who has been cursed by bad timing. His moment has clearly passed.