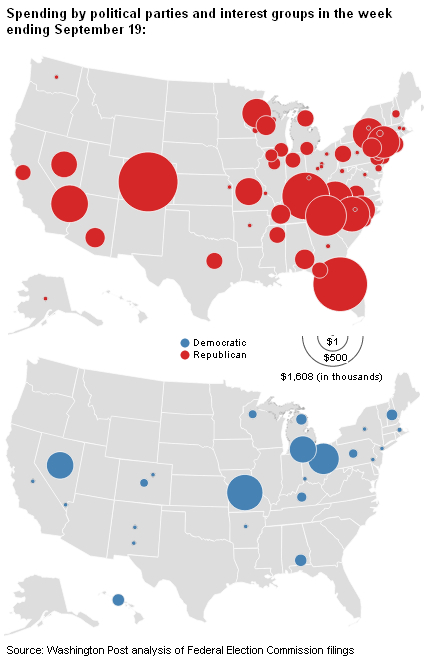 The Democratic Party has been outraising the Republicans when it comes to donations to the national parties. Last month, for instance, the Democratic National Committee raised $10.9 million as compared to the Republican National Committee’s $7.9 million haul. But when it comes to election spending by outside groups, conservatives are blowing their liberal counterparts out of the water. Politico reports:

As of Monday, pro-Republican third-party organizations had paid for a total of $23.6 million worth of ads, while Democratic-aligned groups had spent just $4.8 million on TV.

For the next month — the crucial period during which many voters begin to consider their choices and make up their minds — the disparity is even more daunting for Democrats: Between now and Oct. 20, groups backing Republicans have $9.4 million worth of TV ads reserved across 40 districts, while outfits supporting Democrats have put down only $1.3 million in five districts.

While pro-Democratic labor unions have amped up their spending as well, conservative groups have eclipsed their efforts. In the last three weeks, seven pro-GOP groups spent more than $1 million each, including pro-business organizations like the Chamber of Commerce and Americans for Job Security, while not a single liberal group has matched such spending during the same time period.

The conservative bonanza also includes newcomers like the Karl Rove-backed American Crossroads, which together with its sister organization, American Crossroads GPS, is expected to spend more than $50 million this election cycle. Where’s the money coming from? American Crossroads, for one, has gotten the vast majority of their most recent funds from a small handful of billionaires. Justin Elliott reports that 91 percent of the group’s $2.6 million haul in August came from just three wealthy contributors. Citizens United also helped to fill their coffers: American Financial Group, a Fortune 500 company, gave $400,000 to American Crossroads, making a contribution that wouldn’t have been possible before the Supreme Court decision.

Of course, big-pocketed donors have certainly bolstered the Democrats in the past. But, as Time‘s Mike Crowley explains, they’ve pulled back from the party this election cycle—whether due to the business community’s anger about the Wall Street reform bill, liberal disappointment about Obama’s legislative shortcoming, or a general sense that a GOP takeover is inevitable.

Some point out that the national Republican Party’s fundraising woes could still hobble the GOP in the few weeks of the election, as the party will have fewer resources to target voters and support Get Out the Vote (GOTV) operations. The tea party movement itself may be too nascent, unpredictable, and fractured to bridge the gap in resources. But groups like Rove’s American Crossroads do plan to focus on GOTV and other field efforts in the run-up to November. Altogether, such initiatives have fulfilled their implicit mission of creating a shadow GOP infrastructure to rebuild the party, without having to rely on gaffe-prone leaders like RNC chair Michael Steele—or, for that matter, on the fractious tea party.