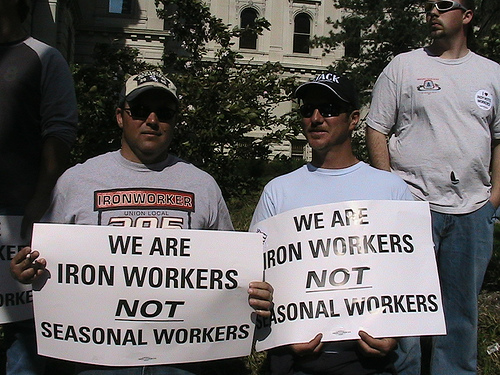 President Obama’s new mix of economic palliatives—tax credits for business research and development, expansion of tax write-offs for business’ investments, pledging $50 billion for infrastructure—has officially landed with a thud. Few doubted that the Republican Party and conservative economists would pan the plan, brand it too-little-too-late, and criticize it as politically motivated. But more than just the usual suspects have slammed the plan, including members of Obama’s own party, casting yet more doubt on whether Congress will even approve the proposals at all.

Sen. Michael Bennet (D-Colo.), an Obama ally, disavowed the president’s $50 billion plan to try to revitalize the roads, rail, and airports in the US. Looking to beef up his anti-deficit cred amidst a tough reelection campaign, Bennet said any new infrastructure spending should come from existing programs like the stimulus, which still contains unused money. “Public-private partnerships that improve our infrastructure are a good idea,” Bennet said in a statement yesterday, “but must be paid for, should not add a dime to the deficit, and should be covered by unused Recovery Act dollars.”

Also coming out in opposition yesterday was Rep. Gary Peters (D-Mich.), who cited similar reasons as Bennet. “There is already funding for infrastructure projects that has not yet been spent,” Peters told the Detroit Free Press, “which is why I voted against this year’s transportation funding bill.” Peters is also on the wrong side of the president on the Bush tax cuts: While Obama wants to maintain them for everyone but the wealthiest Americans, Peters believes “extending the 2001 and 2003 tax cuts for all earners is the right thing to do.” Like Bennet, Peters’ road to reelection isn’t an easy one, either, as he’s trying to hold onto his seat in a wealthy, traditionally Republican district with a tough opponent breathing down his back.

It doesn’t help Obama’s cause that economists of all stripes have dismissed the troika of economic initiatives as mediocre. Mark Zandi, chief economist at Moody’s Analytics, described the proposals as “helpful on the margin to the recovery. But they’re not a game-changer.” Simon Johnson, former chief economist at the International Monetary Fund, writes today, “Any way you cut it, the numbers involved are not big enough to affect unemployment significantly by November, but these ideas—and the Republican rival suggestions on the table—are more about symbols, messages and midterm votes than about accelerating the economic recovery.”

And those are some of the more positive reactions. Others, like the folks at E21, a conservative think tank of sorts focusing on economic issues, have outright blasted the plan as “small business nonsense.”

Economics aside, will the president’s angrier populist tone, his finally stressing the economy above all else (which he was late to do), sway any voters? Or is it too late?