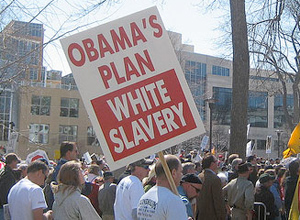 Photo used under a Creative Commons license from Flickr user <a href="http://www.flickr.com/photos/calistan/3447473218/in/photostream/">cometstarmoon</a>.

What do you get when you mix thousands of tea partiers with tens of thousands of black families on the National Mall? We’ll find out on September 11.

While the planning wasn’t intentional, tea partiers and Glenn Beck groupies will get a chance to really make good on their protestations that their ranks aren’t polluted by racists. That’s because conservative activists, some affiliated with Beck’s 912 Project, have organized a big march and rally on the Mall on the very same day, and in virtually the same place, as the National Black Family Reunion. Started 25 years ago by civil rights icon Dorothy Height, the reunion was created to showcase the strengths of the black family. In the past, it has drawn as many as 250,000 people over two or three days. This year, the event will be a one-day “mega-fest” on the Mall between 7th and 14th Streets NW.

Blocks from where Al Sharpton will be leading the prayer breakfast kicking off the reunion, Unite in Action (an umbrella group for some 40 tea party, 912, and other “patriot” organizations) plans to occupy the Mall between 3rd and 4th Streets NW. From there, activists will march down Constitution Avenue to the Washington Monument, essentially sandwiching the Black Family Reunion. Given tea partiers’ propensity to show up at rallies with offensive anti-Obama signage, the set-up has all the makings of a powder keg.

In DC last month, Glenn Beck’s followers mixed fairly peacefully with civil rights marchers, who had come to counter-protest what they saw as Beck’s attempt to co-opt the anniversary of Martin Luther King Jr.’s “I Have a Dream Speech.” But Beck’s event was far tamer than the UIA rally promises to be. (Whereas organizers of the Beck rally banned signs, activists are throwing a sign-making party the night before the UIA march.)

Also potentially inflammatory will be the presence of the Oath Keepers, a rally co-sponsor. Dubbed the new face of the militia movement, the group—whose members tend to view Obama as an enemy of the state—is focused on recruiting current and former military members to pledge to disobey orders they find unconstitutional. The group’s prominent members include “Sheriff” Richard Mack, a militia hero who co-authored a book with the white supremacist Randy Weaver. Addressing another gathering of “patriots” in Valley Forge, Pennsylvania, recently, Mack told the crowd, “My dear friends, I pray for the day that the first sheriff in this country [is] the one to fire the shot heard ’round the world and take out some IRS agents!” “March on DC” organizers were briefly touting Mack as a potential speaker at the march, but he appears to have been supplanted by Stewart Rhodes, the Oath Keepers’ founder.

In late August, when I first spoke to Shiba Freeman Haley, the event producer for the National Council of Negro Women, which sponsors the Black Family Reunion, she had only just learned about the tea partiers’ plans from DC officials. She wasn’t concerned initially, because the officials told her that the tea partiers had yet to secure permits to march on the Mall. But when I informed her the event seemed to be going forward, she expressed fears about the potential for conflict—especially, she noted, because this won’t be the first time that reunion attendees have had to share federal space with sign-wielding tea partiers and “patriots.”

Last September, tea partiers marched right through their reunion, Haley says, adding that she had no advance warning that the tea partiers would be there. “Some of their signage could have [incited] our people.” As it was, she says, “Everybody was really cool. They may not be this year.”

Indeed, the political climate has changed significantly, with the NAACP coming out strongly in July with an official resolution decrying racism within the tea party movement, and tea party activists decrying just as loudly allegations of bigotry.

“I’m afraid of them all,” concedes Haley, but she’s far more concerned about what the tea partiers will do to her bottom line. Last year, she says, the tea party organizers were unprepared for the number of people who showed up on the Mall, and they didn’t have adequate facilities to provide for them. So the tea partiers ended up making use of the Black Family Reunion Porta-Potties and other services, including the food vendors. The National Council of Negro Women had to pick up the tab. “They came last year and enjoyed the food,” laughs Haley.

In March, one UIA organizer reported on the “patriot” movement’s social networking site, ResistNet, that UIA hoped to partner this year with Black Family Reunion organizers to share some resources. Detailing a recent meeting with National Park Service officials, Christine Drawdy wrote, “The National Parks service also said they will have the food concessions open for us and will also reach out to the Black Family Reunion to see if they want to sell their ethnic food as well to our marchers (to foster a bond with that group of people).”

Apparently, plans for fostering those bonds haven’t gone anywhere. Haley says she hasn’t heard a word from the tea partiers or UIA officials, and she insists that they will not be sharing food vendors with them. “They’re going to have to get their own stuff,” she says. (UIA president Stephani Scruggs did not respond to an email seeking comment on whether she or anyone else at UIA has reached out to Black Family Reunion organizers, or whether UIA was taking any steps to ensure that there is no friction between the two groups.)

In the end, concerns about clashes between conservative activists and black families on the Mall may amount to nothing. It helps that the UIA march seems to be getting smaller by the day. Initially organizers seemed to have a much larger event in mind, but they recently modified their permit for the Mall and, according to a spokeswoman for the National Park Service, they are now expecting under 2,000 people for the march. That’s a far smaller number than they had originally planned for—and dramatically fewer than the hundreds of thousands of activists who tramped through the reunion last year.

Most of the tea partiers coming to DC this weekend apparently are planning on attending the bigger rally sponsored by FreedomWorks on September 12. Unlike the UIA event, it will feature a host of conservative luminaries, including presidential aspirant Rep. Mike Pence (R-Ind.), former GOP House Majority Leader Dick Armey, and conservative media mogul Andrew Breitbart. As a result, Haley says, Saturday’s festivities “should be one big happy family—or not so happy, but we’ll all be exercising our First Amendment rights.”